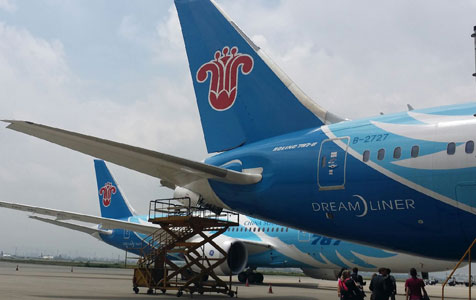 China Southern Airlines says it is open to increasing its presence in Western Australia as passenger numbers to and from the state continue to grow.

The Guangzhou-based airline told Business News it would extend is code share agreement with Qantas in the future if its early success continued.

The airline's senior vice-president of marketing, Zhou Junbao, said the airline had experienced positive growth in passenger numbers since signing the agreement with Qantas for 10 routes within Australia late last year.

Mr Zhou said the next step would be to increase both capacity on those existing routes as well as expanding to other routes including Sydney to Perth and Melbourne to Perth.

China Southern has been flying direct from Guangzhou to Perth since 2011.

Mr Zhou said the route had increased in popularity with flights currently at about 75 to 80 per cent capacity.

When the route was first established, flights were at about 60 per cent capacity.

Mr Zhou said the airline had been working with Tourism WA to increase awareness of WA in China, including sending Chinese celebrities to the state in April and asking them to report on their experience via social media.

Mr Zhou said the initiative resulted in an increase in passenger numbers.

However Mr Zhou said Perth didn't do as well as other Australian destinations because it failed to offer attractive tourism packages encompassing a number of different locations within Australia.

China Southern has also been operating a pilot training facility at Jandakot since 1993.

Mr Zhou said the facility was catering to the airline's demand at present, but it would consider future investment if the market conditions required.

Shanna Crispin is travelling in China as a guest of the Australian Embassy in Beijing.