Chief executive for day at FMG, chance for life

A recent participant in Fortescue Metals Group’s VTEC program has notched up another notable achievement, having slipped into the role of ‘chief executive for a day’ as part of the miner’s unique approach to creating opportunities for Aboriginal people. 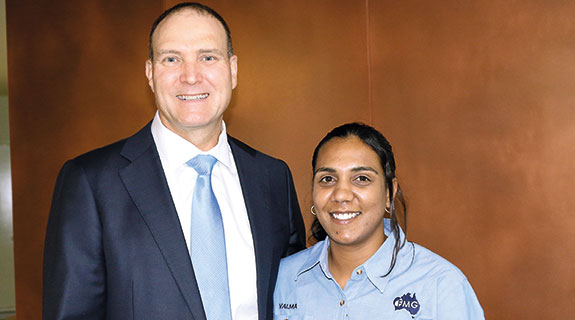 BUDDYING UP: Valma Papertalk shadowed Nev Power in her role as ‘chief executive for a day’ at Fortescue. Photo: FMG

A recent participant in Fortescue Metals Group’s VTEC program has notched up another notable achievement, having slipped into the role of ‘chief executive for a day’ as part of the miner’s unique approach to creating opportunities for Aboriginal people.

Hedland local and civil operator Valma Papertalk shadowed FMG chief executive Nev Power on the day the company released its December quarterly production report, in which it announced it had reduced cash production costs around 45 per cent in the previous 12 months.

Ms Papertalk, whose partner and father of their three children also worked for FMG, before dying late last year, said the company had helped her see she had the strength to overcome adversity.

“I wouldn’t be where I am today if I did not participate in Fortescue vocational training and employment centre program and if I wasn’t mentored and guided by the VTEC team,” she said.

“The team really did walk with me in the dark when I couldn’t find the light.”

Ms Papertalk said the company had encouraged her to seek grief counselling after her partner’s death, helped get her youngest child into daycare, and provided driving lessons so she could get her driver’s licence.

“This program has changed my life through employment. It has given me a brighter future for me and my children,” she said.

The success of FMG’s VTEC program has prompted a commitment from the federal government to develop 29 programs across Australia based on the model.

While many other companies interested in ‘closing the gap’ and building better relationships with Aboriginal and Torres Strait Islanders do so through formal Reconciliation Australia Programs, FMG has chosen to create its own initiatives.

FMG says it has awarded $1.8 billion in contracts to 98 Aboriginal businesses and joint ventures since 2011, and has hired more than 1,000 Aboriginal people directly.

Mr Power said the company had recognised that many Aboriginal communities experienced poor health, living standards and social outcomes, despite significant mining royalties and taxpayer funds, so it had chosen to create opportunities in its own distinct way.

“Fortescue’s approach is to provide economic support through employment, education and business opportunities,” he said.

The VTEC program and CEO for a day initiative were two ways FMG was working to achieve these objectives.

“Valma has faced challenges many of us could not imagine, but in true Fortescue spirit it is her positive attitude, commitment to succeed, and dedication to her family that saw her accept a hand up, not a hand out. She is an inspiration to us all,” he said.

Ms Papertalk said the opportunity had shown her she could set a good example for her community.

“I want to send a message to others to be positive, be determined and never give up,” she said.