IN what is already being pegged as the biggest office leasing deal of the year, Chevron has signed a 10-year lease agreement for the entire 14-level Dynons Plaza office tower. 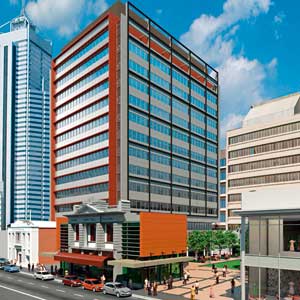 IN what is already being pegged as the biggest office leasing deal of the year, Chevron has signed a 10-year lease agreement for the entire 14-level Dynons Plaza office tower.

The A-grade boutique office development at 905 Hay Street, near the Woodside building, contains about 13,000 square metres of office space and is slated for completion in the second quarter of 2010.

Dynons Plaza can accommodate about 750 staff, providing Chevron with room for future employment growth just a block away from its current home at QV1.

Chevron's Australian business unit is expected to increase its workforce substantially as it develops its Gorgon and Wheatstone gas projects in the state's north-west.

The Gorgon project increased its team from 600 to about 1,000 employees in 2008, with that number expected to expand to 1,200 by mid-2009, while the Wheatstone project team is expected to more than double to about 360 by the end of the year.

"As our Australian operations progress, we now have a portfolio of properties in Perth to accommodate the businesses growth," Chevron Australia managing director Roy Krzywosinski said

In 2007, Stamford scrapped plans for a five-star hotel on the Hay Street site in favour of a commercial office development, citing more attractive returns from office rents.

Industry sources believe the deal could be the biggest pre-commitment office leasing deal of the year because of the lack of new supply of this size likely to come on to the market.

More than 309,000sqm of new office space is scheduled to come online in the Perth CBD over the next two years, more than three-quarters of which is already pre-committed.

Of the major projects scheduled for delivery in 2009, Stockland's 2 Victoria Ave has yet to sign a pre-commitment, although Shell is rumoured to be looking at leasing the entire four-level, 7,200sqm building.

The industry is expecting a difficult leasing environment this year, as declining business sentiment continues to soften demand and push vacancy rates back up around historic norms of between 6 per cent and 7 per cent.

Backfill space is also threatening to become a major issue as companies such as KPMG, Macquarie and NAB relocate into their new buildings.

But the biggest impact is likely to be felt next year, when almost 210,000sqm of space comes online, and the likes of Clough and BankWest move into their new offices at Alluvion and Raine Square respectively.

"The big question in the market is what will happen when BankWest and Commonwealth Bank merge and they all move into Raine Square," one market source told WA Business News.

"I think next year we'll see a bit of a blip if this economy doesn't turn around."

Savills WA divisional director of office leasing, Graham Postma, said the emergence of backfill space, combined with softening rents, could be a silver lining for tenants.

"The position of the market for the last two years is that it was effectively starved of any opportunities," he said.

"The greater availability gives people the opportunity to look at alternatives they didn't have 12 months ago."