Chevron Australia managing director Nigel Hearne has proposed a major shift in the development of WA’s offshore gas reserves, suggesting the industry should collaborate to build a multi-user pipeline to be shared by multiple LNG producers. 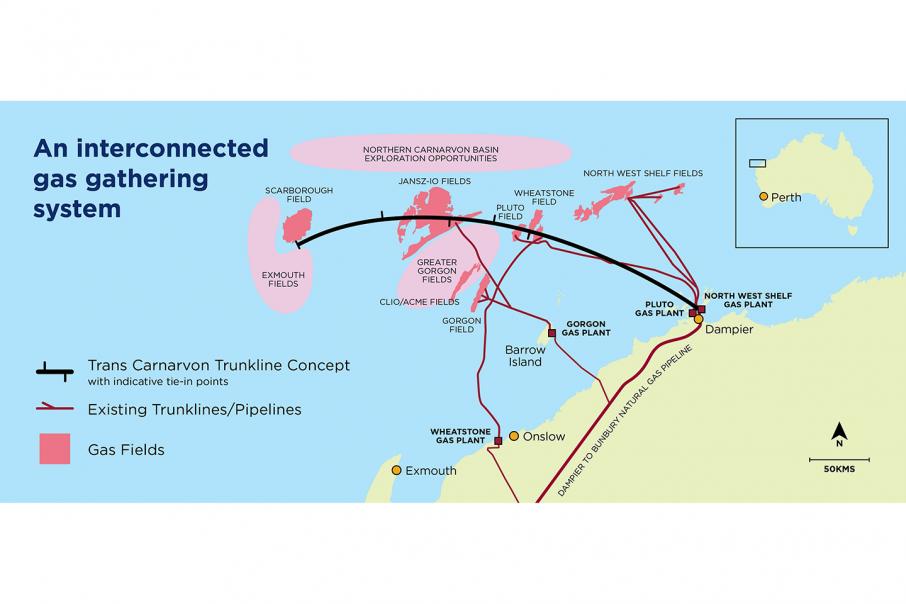 Chevron's depiction of a new multi-user gas pipeline off the WA coast.

Chevron Australia managing director Nigel Hearne has proposed a major shift in the development of Western Australia’s offshore gas reserves, suggesting the industry should collaborate to build a multi-user pipeline to be shared by multiple LNG producers.

He included Scarborough in a list of gas fields that he could be linked to the proposed trunkline.

Woodside Petroleum is currently evaluating construction of its own pipeline to the remote Scarborough gas field, which it has earmarked as a future source of gas for its Pluto LNG plant.

Woodside has also disclosed it has been in discussions with Chevron and Shell to discuss their otential use of the Scarborough pipeline.

“Going forward, there is a better way,” Mr Hearne told the conference.

“Greater industry collaboration, supported by governments, will most efficiently unlock the resources in the ground and extend the benefits.”

Mr Hearne asked the APPEA delegates to think about what was possible if the industry worked together to create a truly interconnected gas gathering system.

“This could link remote accumulations such as Scarborough, Thebe and the Exmouth fields, to existing gas facilities such as the North West Shelf, Pluto and Wheatstone.

“Something like this would enable gas from offshore fields to flow to where it is needed, and when it is needed via an onshore interconnector across the Burrup Peninsula.

“Combining this with existing pipelines to shore that interconnect with the Dampier Bunbury Natural Gas Pipeline, the opportunities for system optimisation and value creation are mind boggling.”

“The timing is right for a truly interconnected gas gathering system to enable the next wave of investment,” he said.

“Global LNG demand projections and supply forecasts show strong gas demand out to 2030 and beyond, given a growing appetite for cleaner-burning natural gas.”

Mr Hearne said this new approach would help the industry meet its key challenges, which he summarised as follows:

Mr Hearne’s proposal comes at a time when the industry across Australia is focused on more efficient, incremental development to feed existing LNG processing trains.

Wood Mackenzie prinicpal analyst Saul Kavonic believes there will be no more greenfields LNG plants built in Australia, but says the industry has plenty of scope to lift output by de-bottlenecking plants such as Gorgon, Wheatstone and Ichthys and through backfill to other plants on the Burrup and in Darwin.

Speaking at a seminar last week at law firm Ashurst, he tipped Scarborough as the most likely offshore field to be next developed.

Key factors were Woodside’s majority ownership of the field and its ability to tie a new pipeline to its existing Pluto trunkline.