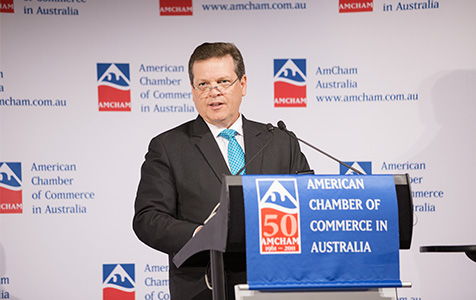 Chevron is well known as the company behind two of Australia’s largest resources projects, but today the oil and gas giant released data indicating it is also one of the country’s biggest investors in research and development.

“We’re not just saying we will, we’re actually doing it,” Mr Krzywosinski told the American Chamber of Commerce lunch.

“In fact, I can announce here today that, since 2009, we have invested more than $1 billion in research and development projects here in Australia.”

The company said this total encompassed R&D activities in its exploration and development business, its WA oil operations, the Gorgon and Wheatstone LNG projects, and environmental innovation.

Specific measures include establishing a global technology centre in Perth in 2007.

The centre employs 130 people working on energy projects across the Asia Pacific region.

Aberdeen is the only other city outside the US with a global technology centre.

Mr Krzywosinski said Chevron had also recently increased its original investment in the University of Western Australia's engineering faculty with a fresh commitment of $6 million.

At Curtin University, the company funds a chair in petroleum geology.

The $1 billion R&D spend is separate from the $2 billion the Gorgon partners are investing in their carbon dioxide injection project.

Designed to pump carbon dioxide into sub-sea storage, Mr Krzywosinski said this was the biggest project of its kind in the world and would make Australia a world leader.