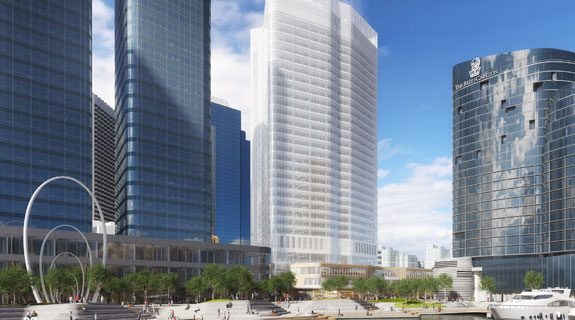 An artist's impression of Chevron's headquarters at Elizabeth Quay.

Oil and gas giant Chevron has applied for a two-year extension to its plans to develop its new headquarters at Elizabeth Quay, but has reiterated its commitment to the project.

Chevron bought a 6,795 square metre development site at Elizabeth Quay in November 2013 for $64 million, and has since been planning construction of a 30-storey tower to house its Western Australia-based staff.

Part of the agreement to develop the site was that Chevron would begin works by the end of next year.

“Chevron Australia today advises it has requested to defer the start of its Perth headquarters development at Elizabeth Quay for two years,” the company said in a statement.

“Signifying the company’s long-term commitment to Perth and the Western Australian community, Chevron looks forward to contributing to the iconic waterfront development."

Its decision comes at a time when the CBD office vacancy rate has spiked to 16.6 per cent, with predictions it would rise further as buildings under construction are completed.

That has resulted in more favourable leasing deals in existing buildings.

"Should construction be delayed the MRA will work with Chevron to ensure that the site is offered as a public space and the area is activated until building commences," Mr Kinsella said.

"The MRA has seen Chevron’s proposed design for the building which will become their Perth headquarters at Elizabeth Quay and the MRA looks forward to receiving the development application."

Speculation had been swirling around Perth for months that Chevron was keen to back away from its commitment.

However, earlier this year the MRA told Business News that all indications were that Chevron was committed to the proposal.

There is also uncertainty over the other major office development site at Elizabeth Quay, where Brookfield Property Partners is working with the MRA to plan a two-tower development.

The global office landlord remains in the preliminary design phase for its development, having not yet bedded down a suitable tenant to anchor the proposal.

Rio Tinto had long been flagged as a potential suitor to underpin an office tower developed by Brookfield, however the mining giant extended its lease at Central Park until 2030 in August, a move first reported by Business News.

With BHP Billiton at home at Brookfield Place, and its offshoot South32 at 108 St Georges Terrace in the former Bankwest Tower, Inpex remains as the last potential anchor for a significant commercial development in Perth’s CBD.

Business News understands the oil and gas producer is looking for a high-profile building it can use to put its name up in lights on the city skyline.