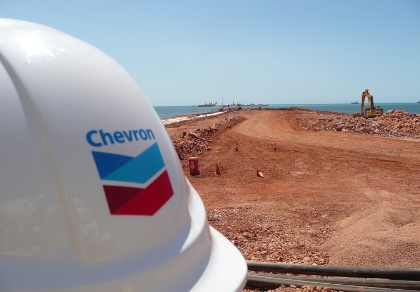 Oil and gas giant Chevron has divested its holdings in the controversial Browse development off the Kimberley coast in exchange for increased holdings around its Wheatstone gas project, currently held by Shell.

Shell's upstream international director Andy Brown said the company was pleased to expad its position in a future LNG project.

"This is a good deal, not only because it aligns with Shell's strategy of bigger direct stakes in key gas resources, but because it also helps to simplify the ownership of the Browse fields."

Shell's stake in the two Browse fields will be 25 per cent and 35 per cent respectively. Other equity holders are Woodside (operator), BHP Billiton, BP and Mitsui-Mitsubishi, which bought into the project earlier this year.

Premier Colin Barnett asserted today that the latest deal may pave the way for more ownership changes, including Chinese investment.

"It reduces the number of participants from six down to five in the Browse Basin and leaves space for China to come in as an equity holder," Mr Barnett told ABC radio on Tuesday.

"Chevron concentrating on its other two LNG projects, the Japanese coming in as a buyer (and) an investor, and the high prospect of the Chinese doing the same is all part of the shuffling and the re-arranging of ownership, which is good news for the development."

Chevron Asia Pacific exploration and production president Melody Meyer said Australia was a key focus area for Chevron, evidenced by its investment and development of the Gorgon and Wheatstone projects in the Pilbara region.

"Consolidating our Carnarvon Basin position furthers our progress towards becoming a leading liquefied natural and domestic gas producer in Australia and Asia-Pacific."

As operator of the Browse project, Woodside has been working to establish a multi billion-dollar gas hub at James Price Point, which has divided the community in the nearby tourist town of Broome.

Other companies involved were considering piping gas from the Browse fields further south to the existing gas plant at Karratha.

The situation has also been divisive among the traditional owners of the land, some of whom support the development of an LNG plant at James Price Point while others vehemently oppose it.

The premier today reiterated his preference for the James Price Point project site, rather than piping the gas to Karratha.

He said joint venture partners had told him they wanted to "keep that as an option".

While he could not force the joint venture to pipe the Browse gas south to the Pilbara, he warned "they may lose the gas rights".

Mr Barnett also said the project could be delayed by a year or so amid uncertain market conditions.

Earlier this year, he said Chinese parties had flagged interest in taking a stake in Browse of up to 25 per cent.

"Let the companies make a commercial decision," he told reporters.

"Threatening companies that employ tens of thousands of West Australians is the wrong way to go."

Mr McGowan also took a swipe at the government's bid to compulsorily acquire unallocated Crown land at James Price Point for the hub.

He had flagged the possibility in 2008 when potential sites were being short-listed in response to a dispute between rival native title claimants.

The government was earlier this year forced to resubmit documentation for the compulsory acquisition after the paperwork was deemed invalid.

Mr McGowan said the process had been disastrously managed.

"And what you see is a range of companies expressing no confidence in Mr Barnett's handling of this matter," he said.

Mr McGowan said the joint venture's delays in reaching a final decision to proceed with the project pointed to a "failed process", while Mr Barnett flagged the possibility of further hold-ups in an uncertain broader market.