Chevron Australia has become the latest resources giant to put its name on a public attraction, with the state government announcing the company will fund a parkland within the new Perth Stadium precinct. 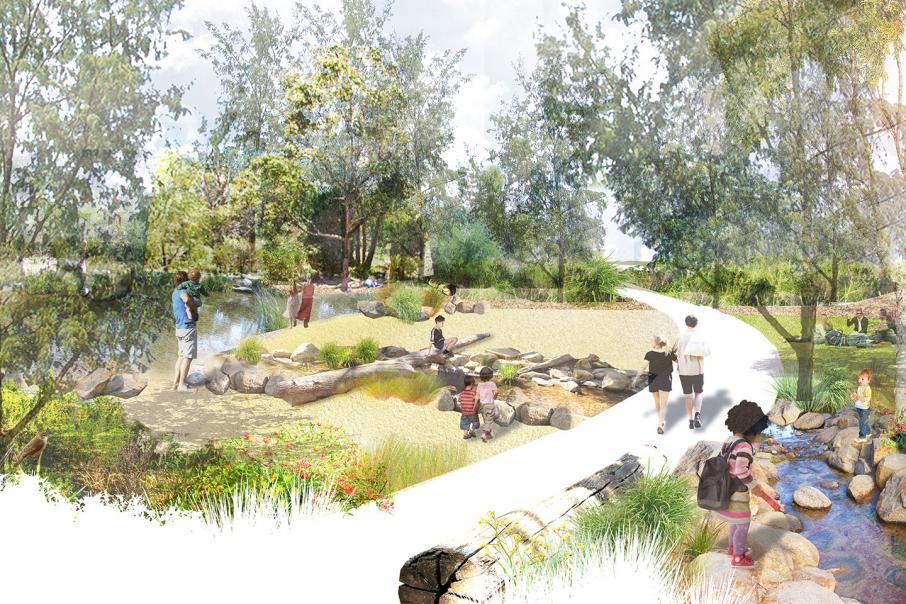 An artist's impression of the Chevron Parkland at the new Perth Stadium.

Chevron Australia has become the latest resources giant to put its name on a public attraction, with the state government announcing the company will fund a parkland within the new Perth Stadium precinct.

Chevron will build the ‘Chevron Parkland’ on 2.6 hectares of rehabilitated land next to the new stadium in Burswood, which will include six nature play areas and Aboriginal artworks.

“The parkland design was developed with input from the Whadjuk community and is inspired by the Noongar six seasons, and I thank the Whadjuk people for their involvement,” Premier Colin Barnett said.

“I also acknowledge and thank Chevron for their partnership in this project, which will deliver a rehabilitated parkland for Western Australians to discover and enjoy.”

“The play areas will include various climbing, balancing, tunnelling and chill-out elements, plus sand pits and lookouts,” Ms Davies said.

“Each play area caters to children of all ages and has picnic and barbecue facilities in close proximity for easy access and supervision.”

Chevron Australia managing director Roy Krzywosinski said the company was pleased to be part of another legacy project for the state.

“We have a long history of environmental stewardship across all our business activities in Western Australia and we are proud to help create a revitalised parkland which will deliver a vibrant new inner-city destination for the community to discover and enjoy for decades to come,” Mr Krzywosinski said.

Chevron is the second commercial partner named for the new Perth Stadium, with BHP Billiton last year committing $5 million towards developing a boardwalk and amphitheatre within the precinct.

BHP also contributed to the water park at Elizabeth Quay, which has been closed several times since it opened due to contaminated water.

Rio Tinto is another mining giant to have placed its name on a local public feature, with the company contributing to the Rio Tinto Naturescape in Kings Park.