Having run the local operations of multinational MTU Detroit Diesel for 10 years, Mike Cippitelli has established a new business that is defying the tough times facing many operators in Western Australia. 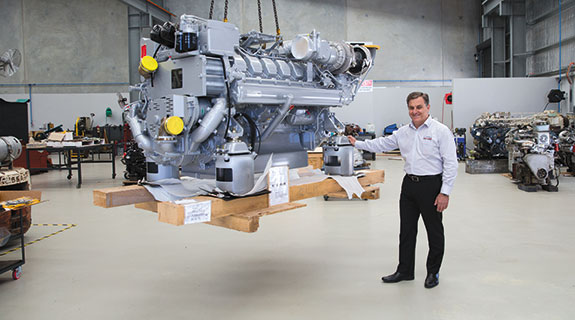 Having run the local operations of multinational MTU Detroit Diesel for 10 years, Mike Cippitelli has established a new business that is defying the tough times facing many operators in Western Australia.

Ches Power Group has expanded at a brisk pace since moving to purpose-built premises in Bibra Lake late last year, with staff numbers expanding from 10 to 26.

It has grown on the back of an unusually diverse client base, which includes Rio Tinto, Citic Pacific Mining, Carey Mining, Bhagwan Marine and Rottnest Express.

That reflects Mr Cippitelli’s resume, which includes stints as president of the WA Mining Club and chairman of Marine WA.

In his new role, Mr Cippitelli is hoping to blend aspects of his big-business background at MTU Detroit Diesel Australia (which recently started trading as Penske Power Systems) with the best aspects of small business.

“We’re coming from a value perspective rather than volume,” he said.

The new business has been built on the 2013 acquisition of Ches Diesel & Marine Services, a long-running operation that was mainly focused on the marine sector.

Ches Power Group is a dealer for nearly a dozen manufacturers of specialist mechanical and electrical products, but is focused on value-add opportunities.

“My model is that we support whatever we sell,” Mr Cippitelli told Business News.

Mr Cippitelli said while competing businesses had some of the products and services offered by Ches, he wasn’t aware of any with the same package.

“We can install, commission, design, service; there’s a lot of strings to the bow,” he said.

He has also added project management and engineering capabilities, and sees plenty of growth potential.

“We plan to expand to Geraldton, we will have two or three field service people up there,” Mr Cippitelli said.

“We will also have people on mine sites over the next few months.

“We’ve also had people asking us to go to Darwin.”

Mr Cippitelli remains positive about growth opportunities, with production in the resources sector still at high levels after the big expansion projects of the past decade.

Cost cutting in the mining sector had also created opportunities, as companies were looking to outsource work previously done in-house.