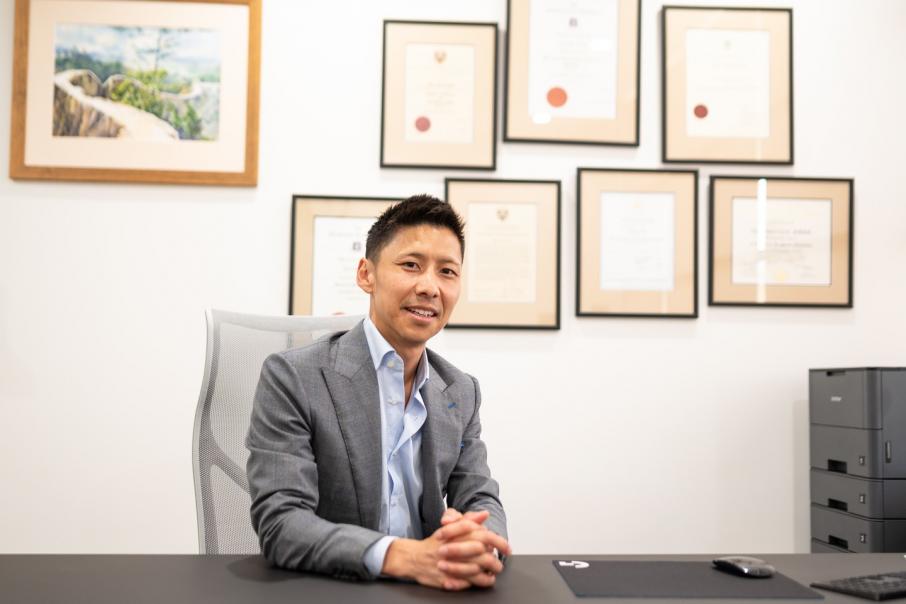 As clinical lead for lymphoma at Sir Charles Gairdner Hospital, Professor Cheah spearheads clinical trials of new and experimental medicines in people with advanced blood cancers, many of whom would otherwise not have other options.

He routinely holds teleconferences with counterparts in the US, divides his time between Sir Charles Gairdner Hospital, Hollywood Private Hospital and Harry Perkins Institute of Medical Research, visits patients and oversees clinical trials, before tending to emails, paperwork and liaising with sponsors and pharmaceutical companies.

That’s what an average day has looked like for Professor Cheah since 2017, when he founded Blood Cancer Research WA, an organisation that facilitates access to potentially life-saving new drugs through clinical trials for Western Australians with leukaemia, lymphoma and myeloma.

Last year, BCRWA facilitated 35 trials involving about 120 patients (four times the number able to participate when it was established).

The waiting time to access a trial has fallen over the years, with BCRWA’s growth underpinned by financial support from the Snowdome Foundation, a Melbourne-based not for profit raising funds to support research into blood cancers, and donations from WA-based philanthropists.

Each year, more than 17,300 Australians are diagnosed with blood cancer and about one-third of them will die from it.

Despite blood cancers being the second most common cancer – and on track to be the leading cause of cancerrelated death by 2030 – terminally ill patients in WA had very little access to potentially life-saving clinical trials until recently.

In fact, before BCRWA was established, specialists were routinely sending patients interstate to access treatments not yet available in WA.

Professor Cheah said that gap in the system provided the catalyst for BCRWA.

“Frankly, your choices were to die or, if you wanted the opportunity to be in a trial, you had to go somewhere where the trial was happening, and for a long time that was Melbourne,” he said.

After completing a medical degree at the University of Western Australia in 2003, and undertaking post-graduate training in Fremantle, the Perth-born blood cancer specialist travelled to Melbourne and the US to take up various fellowships.

Professor Cheah said that, upon his return to WA six years ago, it was clear the inability to provide potentially life-saving treatment through clinical trials in WA was primarily caused by a lack of human infrastructure.

“I distinctly remember one of the first patients I looked after when I came back [to Perth]; he had a common kind of lymphoma,” he said.

“The standard treatment didn’t work and, at that point, in places that I had worked previously, I would have offered him a clinical trial.

“In that way, he would have been able to access something novel that could have potentially cured him or added years to his life.

“But at the time, I had just one option in terms of a trial.

“Unfortunately, that didn’t work, and that person died.

“That story was being repeated hundreds of times across the state, and I decided that needed to change.”

In the months that followed, Professor Cheah said he identified the real bottleneck to more people getting clinical trials was time spent with a doctor. Another crucial factor was funding.

“The issue was human infrastructure,” he told Business News.

“But the government doesn’t fund these positions, you have to go out there and get the funding for yourself.

“But I actually think that clinical trials should be core business to anyone involved in health care as it’s the only way to advance things.

“Clinical trials are hard work. We didn’t need more buildings; what we needed was more people to do the work and run the trials.”

In 2016, Professor Cheah approached a number of the state’s philanthropists, most notably Adrian and Michaela Fini, to help establish BCRWA.

He has also enlisted the help of several prominent WA businesspeople to sit on the board, including Fuelfix & Tanks2Go managing director Mark Westbrook, and APM Employable Me chief executive officer Fiona Kalaf.

In its initial stages, BCRWA established an easy-to-navigate website that listed available trials.

Then, Professor Cheah asked colleagues to send him their blood cancer patients who were not responding to standard therapies.

The team offered to take care of everything: see the patients, conduct the screenings, and take responsibility for all of the necessary paperwork.

It was painstaking work, but the model turned out to be successful.

Currently, BCRWA is run like a micro startup, operating out of three hospitals with the capacity to facilitate the trials and with the bulk of its $600,000 in annual operating costs being spent employing staff.

Those eight staff are ‘fellows’, qualified doctors a few years shy of completing their specialist training in haematology.

Professor Cheah is passionate about improving outcomes for blood cancer patients, but he’s just as devoted to training the next generation of lymphoma researchers, allocating time to work as a clinical professor at UWA.

Most of the trials are run by industry using drugs from multinational pharmaceutical companies, but BCRWA is also spearheading trials utilising its own ideas.

Most recently, Professor Cheah designed a trial called ‘leverage’, which combined drugs from three different pharmaceutical companies as part of a treatment package for those with follicular lymphoma.

“We’re getting great results from that and we’re really excited about it,” he said.

The organisation is also getting involved in a game-changing new type of cell therapy called CART, whereby an individual’s own white blood cells are harvested, genetically manipulated and reprogrammed to attack the cancer before being reinfused.

The therapy is already showing promising results in blood cancers unsuited to chemotherapy.

BCRWA’s work has allowed the number of trials accessible for those suffering from blood cancer in WA to more than quadruple in just four years.

That growth has helped lift WA to join the best in the country in terms of access to blood cancer research trials, removing the need for many patients to travel interstate and overseas to access potentially life-saving treatment.

Removing those barriers, authoring more than 100 publications, and securing more than $10 million in competitive grant funding has earned Professor Cheah accolades in recent years, including Cancer Council WA’s Early Career Cancer Researcher of the Year in 2018, and the Woodside STEM Excellence award at the 2019 Business News 40under40.

But Professor Cheah insists he remains driven by stories, not numbers.

“I have a patient who was referred to me in 2016 and, at the time she was sent to me, she was told she had three months left to live,” he said.

“Unfortunately, she passed away about six months ago, but she got an extra five years of life because of these studies.

“I remember in her last days, she said to me that when we first met, she didn’t really have much hope. But through these trials, not only had she seen her first grandchild be born she saw her go to school for the first time.

“To me, that’s more powerful than any graphs, any numbers. I mean, we’re giving people extra years.

“Those stories, they’re why I get out of bed in the morning.

“It’s been a lot of hard work.

“I go to bed at about midnight and get up at 7am and do it all again, but it’s only possible through the philanthropic efforts and that generosity.”

When he set out to establish a centre of excellence for blood cancer in WA, Professor Cheah’s primary goal was to save patients from having to travel interstate or overseas for treatment.

He has managed to achieve that, along the way helping WA approach parity with Melbourne in terms of access to clinical trials for blood cancer.

Now, Professor Cheah and his team are turning their attention to consolidating the gains they’ve made and ensuring that the centre’s efforts remain sustainable; a plan he said would require further investment from BCRWA and government.

In the coming years, Professor Cheah also hopes to cement the state’s place as a leader in blood cancer research, both nationally and internationally.

“We will be looking to continue to grow our program, offer more trials and bring more immunotherapies as well to blood cancer patients,” he said.

“We will also be looking to ensure that WA remains a leader nationally and internationally when it comes to delivering these treatments for patients.

“We see ourselves as a vehicle for making sure that WA patients have the best care, and we’re pretty agnostic about what that actually looks like.

“It’s something we care passionately about; we care about making things better.

“We don’t care where the trials get done, we just want to make sure that the patients here in WA actually have access to them.”