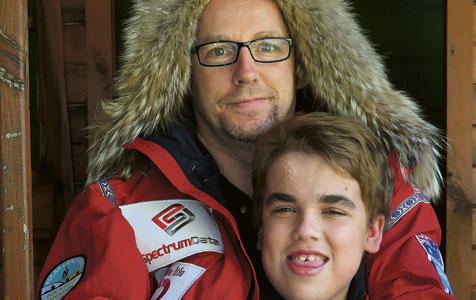 THE combination of healthy, sports-based pursuits and worthy causes has proved to be a winning formula for the community sector and not for profits in terms of publicity and fund raising.

The growing popularity of these events, however, is presenting a new challenge for charities, individuals and organisations looking for support – how to be heard above the rest.

One way to make a mark is to do something many would consider ‘extreme’, or at least a bit more challenging than a fun run; and that’s the route Heartkids WA chairman Guy Holmes has chosen to take in signing up for a 13-day trek to the North Pole to raise funds for Heartkids WA and awareness for DonateLife.

“Two years ago I joined the HeartKids WA board, and after seeing first-hand how they help thousands of families affected by childhood heart disease each year, I wanted to do my bit to raise much needed funds,” Mr Holmes said.

He said the decision to go to the North Pole was based on his desire to do something unique and challenging, but did not keep him away from his wife and five children for an extended amount of time.

Family is Mr Holmes’ primary motivation for taking on this venture, specifically his eldest son Owen, who suffers from medullary cystic kidney disease.

Owen’s kidneys failed at age two, and after 12 months on dialysis it was clear he would require a kidney transplant.

Mr Holmes’ wife was found to be a suitable donor and the transplant was successful; several months later, however, Owen suffered a stroke, resulting in permanent
brain damage and poorly controlled epilepsy.

Now 13, Owen is in good health and his kidney function is fine, but eventually he will require a new kidney – meaning time on the waiting list.

“Knowing that Owen will one day need a new kidney and understanding the crisis that typically comes with waiting for an organ transplant drives my passion to try and raise awareness for DonateLife,” Mr Holmes said.

During his time with Heartkids WA, Mr Holmes has rebuilt the board, doubling its size, and has also hired the organisation’s first CEO.

He has also overseen the growth of the annual Heartkids WA ball, which this year had 800 attendees, up from 400 the previous year, which was matched by a doubling in the number of donations.

Mr Holmes said Heartkids WA’s profile was growing in the community long before he began organising his trip, particularly as a result of the award-winning street art campaign engineered by brand-builder SHED (Creative & Strategic Coalition).

The ‘Street Heart’ campaign involved the pasting of large-scale adhesive artworks onto the pavement and walls throughout the CBD, with the artworks incorporating cracks
and imperfections from the underlying surfaces to help illustrate damaged hearts.

Before departing for his expedition, Mr Holmes had raised 75 per cent of his $20,000 target, and said others had been quick to get involved.

“I know of numerous people who have signed the donor registry as a result of this, which is really what I was trying to achieve,” he said.

To generate further awareness of the trek, SpectrumData has set up a GPS receiver for Mr Holmes to use with his iPhone, enabling him to send text messages as well as his location to Facebook, allowing people to track his progress over the course of the trek.

Mr Holmes intends this to be a one-off event due to the difficulty of finding participants prepared to undertake the rigorous journey, however he hopes the event will continue to raise money and awareness long after he returns.