SIXTY per cent of Australian charities have reported falling revenues during the past six months with two thirds predicting a further loss of income during the next year. 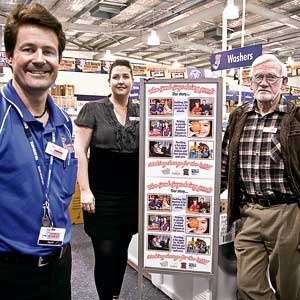 SIXTY per cent of Australian charities have reported falling revenues during the past six months with two thirds predicting a further loss of income during the next year.

A new survey by PricewaterhouseCoopers, the Centre for Social Impact and the Fundraising Institute Australia, highlights that declining sources of funding and rising costs are key challenges for the sector.

With most businesses feeling the impact of the global financial crisis, many larger companies have started reducing donations to fund-raising campaigns.

CSI spokesperson and report co-author, Peter Shergold, said the survey results were worrying for the not-for-profit sector, which had been spending more on fundraising campaigns in recent years.

One of the hardest hit charities is Starlight Children's Foundation, which expects its income to plummet by $2 million this year.

The Make-A-Wish Foundation last year reported it spent more than $5 million on fundraising - 36 per cent of its $14.4 million budget - and $2.6 million on administration and support services.

The Catherine Freeman Foundation spent a third of its $213,000 income last financial year on fundraising and administration.

The nation's biggest manager of charitable trusts, Perpetual, recently revealed almost 950 charities have applied for funding this year, up 26 per cent on 2008, with applications totalling $60 million.

However, the PwC, CSI and FIA survey found individuals continue to dig deep to support non-profit organisations, with 57 per cent of the charities surveyed reporting no change in cash donations.

And it seems small business is doing the same, with appliance retail chain The Good Guys raising $2 million for 150 charities over the past three years, with the 12 Western Australian franchises raising more than $300,000 after they agreed to donate a percentage of all sales to charity.

The Good Guys Joondalup proprietor, Debbie Lanario, said the state's franchises should be commended for their effort.

Organisations to receive funding from The Good Guys include the Princess Margaret Hospital, School Volunteer Program, Surfing for Disabled, and one of Ms Lanario's charity partners, the Patricia Giles Centre.

To date, the franchise has funded a mentoring program at Princess Margaret Hospital's Megazone, research into cholesterol and heart disease, as well as mentoring programs for primary school children.

Owner of The Good Guys in Osborne Park, Paul Robinson, acknowledges that the community in which he operates is his livelihood and strongly believes in strengthening it by reinvesting funds to address local community needs.

"Obviously, getting involved like this you're going to have huge demands on your resources, but in my experiences the more you give out the better off your business will be," Mr Robinson told WA Business News.

"As an owner-operator of a business involved in the day-to-day operations of your store, you are always busy, but it's important that you give back to the community you work in so that there is a better fit with the business in the local community."

SVP operations manager Tim Allan said funding provided by The Good Guys had helped the not-for-profit organisation recruit more than 400 mentors and retain people like John Leonhardt, who joined the program in 1994.

The Good Guys works in partnership with United Way, a not-for-profit organisation that connects businesses with a philanthropic arm to charities and other benevolent institutions.