Edith Cowan University vice-chancellor Stephen Chapman has questioned whether it is the role of universities to prepare students for particular jobs. 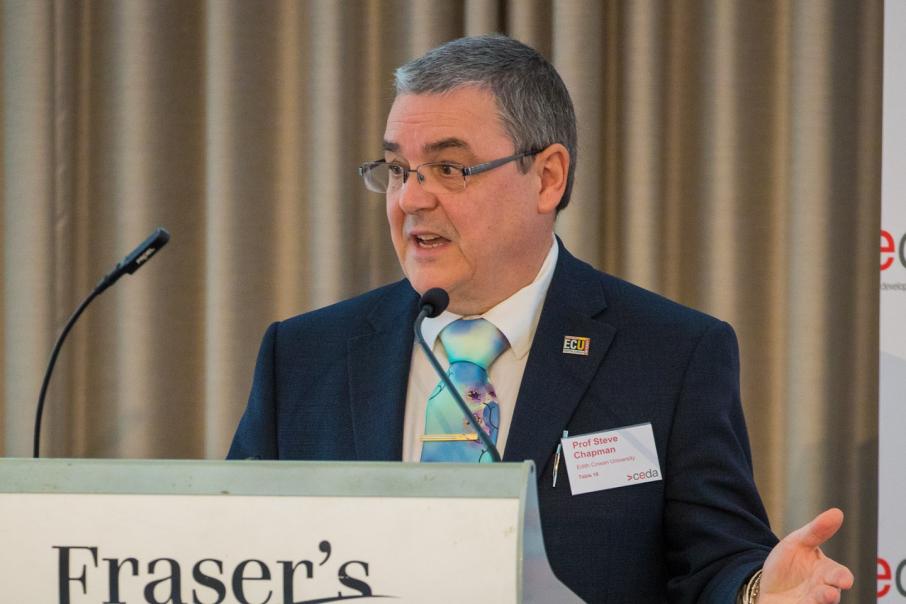 Stephen Chapman says universities should be about improving the human condition. Photo: CEDA

Edith Cowan University vice-chancellor Stephen Chapman has questioned whether it is the role of universities to prepare students for particular jobs.

Professor Chapman told a Committee for Economic Development of Australia event in Perth yesterday he instead believed the value of higher education came from teaching academic, rather than vocational, skills.

Reflecting on his chemistry studies, Professor Chapman said higher education was valuable because it taught the broader value of analytical abilities, critical thinking and problem solving, rather than preparing students for jobs specifically.

“A university has much loftier ideals; it’s about improving the human condition,” he said.

“It has a moral purpose in the discovery and dissemination of knowledge for the betterment of us all.

“I imagine most of you … who have degrees would agree you probably don’t use your core curricula, you use the skills you learned.”

Appearing alongside the vice-chancellors of Western Australia’s four other major universities at the CEDA forum, Professor Chapman sought to reframe the issue when asked whether universities were preparing students for the future of work.

He suggested the audience consider whether it was the fundamental role of universities to prepare students for jobs when there were other institutions that already did that.

He said higher education should instead focus on the traditional value of critical and analytical skills to students.

“Universities bring the ability to think to our students, and that’s what prepares them for work across their lifetimes,” Professor Chapman said.

Moderated by KPMG’s Stephen Parker, the panel discussed some of the most pressing issues facing WA’s universities, including how degrees are marketed and how the state’s five major institutions can best compete and interact with one another.

However, it was questions around the value of university that dominated proceedings, with Professor Chapman returning throughout to themes of automation, artificial intelligence and technological change.

In his view, it was inevitable that most routine and manual jobs would vanish in the near future and that there was no reason to think they would return.

“Why should they?” Professor Chapman asked.

“Why should we make a human do a repetitive job when a machine can do it much better?

“In order to prepare students for the future of work, we need to continue to teach them how to think.”

In defending the traditional role of a tertiary education, Professor Chapman argued performance-based measures of success were pushing universities towards being something they were never meant to be.

He explained the solution on a national level would be to adjust expectations for graduates.

Currently, the federal government measures graduate success as the rate of graduates who go on to find full-time work four months after the completion of their degree.

With the increase in freelance work, as well as the changing nature of employment contracts globally, Professor Chapman argued that measure was profoundly out of step with how the economy was evolving.