Changing of the guard at Deloitte and PwC 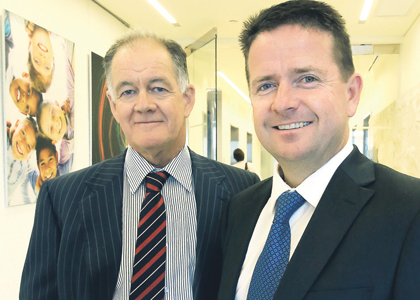 IT could hardly be called upheaval, but there has been a rare changing of the guard at the top end of Perth’s accounting world, with two of the big four firms this year handing over the reins to new local managing partners.

At Deloitte, consulting partner Michael McNulty has taken over from Keith Jones, who had the top job for 15 years.

Rival PwC has undergone a more rapid succession, with auditor Justin Carroll assuming the leadership from Nick Brasington, who had just 18 months at the helm.

Both Mr Brasington and Mr Jones will remain involved in their respective businesses. Mr Brasington will stay with PwC in Perth to lead the global quality assurance review, while Mr Jones has been appointed as Deloitte’s national chairman, replacing former Queensland premier Wayne Goss later this year.

Both the new Perth managing partners will remain involved in their core disciplines on a part-time basis as well as overseeing the Western Australian operations.

“I will stay on the tools,” Mr Carroll said.

“I think that is important.”

He said the plan was to split the emphasis between the two roles once he had bedded down the transition.

The similarities don’t end at the way the pair have structured things. Both Mr McNulty and Mr Carroll are former students of Newman College and are involved in the governance structure at Notre Dame University, the former as a governor the latter as a director.

Mr McNulty will be downsizing some of his broader consulting responsibilities as part of the change. He has been national head of oil, gas, mining, energy, utilities and consumer business as well as head of resources and energy for South-East Asia. He said he was relinquishing those national and international roles but would remain the leader of consulting in Perth.

Mr Jones, who also led Deloitte’s energy and resources industry group and its China services group in Australia, will retire from the firm in May 2013. He is considering other directorship roles outside the chairmanship of the accounting firm.

Mr Gerrard and Mr McNulty both joined Deloitte in 2002 from Andersen, which had imploded globally. While most of the Perth Andersen team went to Ernst & Young, Messrs Gerrard and McNulty chose to take their consulting practice to Deloitte, which ended up being the only major accounting firm to remain committed to the sector at the time.

Most of the firms have rebuilt their capacity in the area in one way or another since that period, most notably PwC, which acquired GEM Consulting and Mainsheet Corporate a few years ago.