Woodside Petroleum has received a first strike against its remuneration report, with about 27.6 per cent of shareholders voting against it, while chairman Michael Chaney has flagged he may not step down at the next AGM as previously suggested. 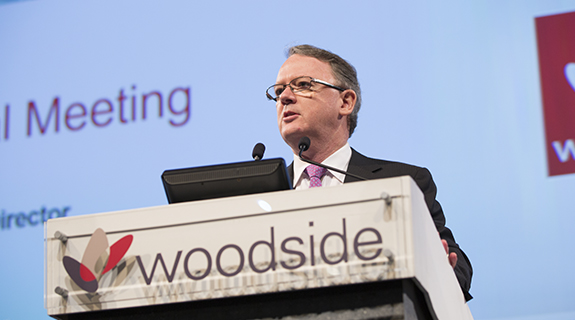 Woodside Petroleum has received a first strike against its remuneration report, with about 27.6 per cent of shareholders voting against it, while chairman Michael Chaney has flagged he may not step down at the next AGM as previously suggested.

Mr Chaney said although a number of energy companies internationally had received very large votes against remuneration reports, it was a disappointing result.

“Its an increasing challenge for boards and remuneration committees to try and structure their remuneration so that it satisfies all shareholders … but motivates and attracts the right people,” he said.

He said some shareholders supported the use of relative total shareholder return, which was the best long term measure, while others were opposed to it.

In the short term, remuneration is partly connected to operational matters such as safety and production performance, he said.

It is understood Shell, which has a 13 per cent stake in Woodside, did not vote against the report, while proxy advisers ISS did recommend a vote against, and the Australian Shareholders Association cast available proxies against also.

Under corporations law, if a company twice receives a vote of more than 25 per cent against its remuneration report at consecutive annual general meetings, a vote is called to spill the directors.

Mr Chaney told the meeting that within Australia, the majority of shareholders had supported the report, with about 75 per cent of negative votes coming from shareholders offshore.

“We believe that the remuneration outcomes in 2015 appropriately reflect the position of strength which Woodside enjoys today compared to most oil and gas companies,” Mr Chaney said.

“That position is a result of management that is disciplined, focused on cost control and productivity and on long term shareholder returns.“

He said that although the report had been passed last year, the structure had not changed in the period since.

Mr Chaney said he still intended to leave the role in 2017, although that may not be at the April meeting.

Whether it be in the middle of the year or later would be yet to be determined, he said.

Mr Chaney, who has joined the board a few months before becoming chairman, said he and expected a similar procedure would take place for the incoming chairman, giving them time to get to know the company’s assets.

Back to the future

Woodside chief executive Peter Coleman responded to comments by Fortescue Metals Group chief executive Nev Power earlier this week suggesting that the company should use or lose its retention lease over the Browse development.

‘‘The joint venture that’s in place at the moment is the one that’s going to give it the very very best chance to move ahead,” Mr Coleman said.

Woodside holds a 30.6 per cent share in the venture, while Shell holds 27 per cent and other shareholders include BP.

Mr Coleman said the partnership was doing everything possible to get the fields to work, and gave a hint the joint venture partners would be looking to go back to basics when it came to designing the project.

“We need to look back to the future … looking back to the way we've learned to do this historically,” he said.

That didn’t necessarily mean piping the gas to the North West Shelf Venture plant near Karratha either.

“The amount of volume you need to pipe the gas down is very significant to get that to be economically attractive,” Mr Coleman said.

“(It’d be) probably the longest pipeline we’ve built in Australia, at least subsea.

“So there's  a lot of things that suddenly become firsts again and what we actually need to do is get Browse into something we’ve done before and many times.”

He said there was excellent alignment between the joint venture partners on the way forward.