Chaney at odds with RBA on investment 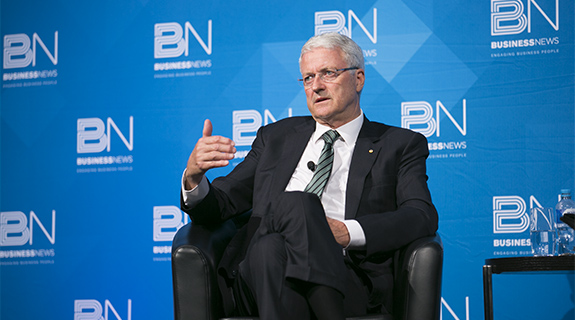 Mr Chaney said these rates, which determine whether a company will go ahead with a project, had fallen about by about 5 percentage points in the past five years, a position in line with comments by his predecessor in the role, Bob Every.

“The governor and the deputy governor of the Reserve Bank have made statements about companies setting hurdle rates too high, not reflecting low interest rates, and not being willing to invest,” he said.

“Companies use the capital asset pricing model, to work out their weighted average cost of capital.

“And you look at the portion of each that you want to carry and you do a blend of those and say this is our weighted average cost of capital.”

“I’d rather not say what companies are using, because it's a competitive issue, but where it used to be about 15 per cent it is about 10 per cent after tax now, and actually lower in some cases.”

But data from the RBA in June suggested that about two thirds of firms did not update hurdle rates as frequently as their weighted cost of capital calculations.

Mr Stevens spoke about the issue in an address to The American Australian Association in New York in the middle of the year.

“A striking feature of the global economy, according to World Bank and OECD data, is the low rate of capital investment spending by businesses,” he said.

“In fact, the rate of investment to GDP seems to have had a downward trend for a long time.”

See photos from the breakfast here.

He said a concurrent increase in the equity risk premium might be explained by stickiness in hurdle rates.

“I cannot speak about US corporates, but this would seem to be consistent with the observation that we tend to hear from Australian liaison contacts that the hurdle rates of return that boards of directors apply to investment propositions have not shifted, despite the exceptionally low returns available on low-risk assets,” Mr Stevens said.

“The possibility that, de facto, the risk premium being required by those who make decisions about real capital investment has risen by the same amount that the riskless rates affected by central banks have fallen may help to explain why we observe a pick-up in financial risk-taking, but considerably less effect, so far, on ‘real economy’ risk-taking.”

“I think we need to have much more flexibility in the system nationally,” Mr Chaney said.

Such arrangements would provide a boost to productivity as workers were encouraged to work in collaboration with businesses to find improvements.

He also reiterated his support for improving gender balance on boards including through the Target 30 program, which is seeking to achieve 30 per cent female representation on boards.

“I’ve been a strong supporter of it,” he said.

“Nab will have 30 per cent next month, Wesfarmers already has.

“Woodside will have. My mission is to have 50 per cent women at Woodside by the time I retire in 2017.’’

He said the biggest challenge was to get women into senior management to build the skills for board positions.

Companies needed seasoned people on boards who are capable of governing and guiding the chief executive, and that required experience, he said.

For a full wrap-up of the event, including Mr Chaney’s views on board succession planning and on good governance, check out the next edition of Business News on November 30.