Chalking up the changes

The digital revolution is well and truly under way, and media is at the pointy end of the changes. 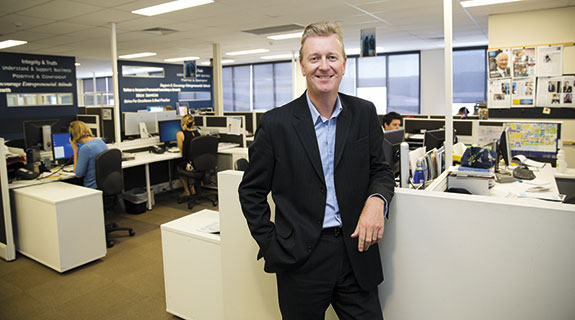 The digital revolution is well and truly under way, and media is at the pointy end of the changes.

New Business News CEO Charlie Gunningham believes every business faces the threat of digital disruption and it is not just a few sectors, such as traditional media businesses, that need to address challenges created by technology.

After more than a decade as a tech entrepreneur in the real estate sector, Mr Gunningham joined Business News more than 18 months ago as the business was implementing the first stages of a digital transformation to confront rapidly changing market dynamics.

Mr Gunningham takes over the helm of Business News from Elton Swarts, who will relinquish his full-time executive role but remain as chairman, allowing him to devote more time to other business interests.

“There is no business that won’t be changed by this transition, no-one is immune,” Mr Gunningham said.

“Technological disruption is hitting some industries more than others right now, but no-one can be complacent; there will be new routes to market and more efficient ways of operating and those that don’t embrace it will face competitors that do.”

After a brief period as general manager digital, Mr Gunningham became chief operating officer, overseeing a host of projects that have revolutionised the business both inside and out. To the audience, much of that change appears as much more user-friendly ways to find the online news and data; but it also includes new accounting and customer relationship management systems.

Mr Gunningham notes that even a key change in the traditional Business News newspaper to a gloss style has occurred in this time, as the business adapts to changing circumstances.

The co-founder of aussiehome.com, an early entrant in the online real estate sector, which was acquired by REIWA, Mr Gunningham witnessed the devastation of newspapers’ classified advertising as complacent daily papers ignored the threat of web-based competitors.

However, that change did not occur overnight and, looking back, the English-born schoolteacher who did an MBA at the University of Western Australia, wished he’d known what he does today.

“Being early often feels like being wrong,” Mr Gunningham said.

“But the truth is I wish I’d have done things faster, rather than with the caution that I had when it all seemed so uncertain.”

His advice is to stay close to customers and pay attention to their shifting needs; always be on the lookout for new ways of getting to market, gaining efficiencies, or growing new services, and never think any business is safe from new entrants – just assume your cash cow is under attack right now.