Certain to deal with uncertainty

Events of the past month show that dealing with uncertainty continues to be one of the few certainties facing business. 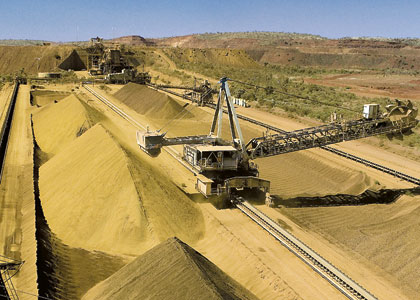 CHANGE: The price of iron ore has fluctuated sharply over the past five months, confounding the pundits.

Events of the past month show that dealing with uncertainty continues to be one of the few certainties facing business.

IN September last year, Fortescue Metals Group shocked the business world when it announced it was slashing about 1,000 staff and contractors and halting spending on its Kings mine project.

Yet in the week between Christmas and New Year, when most people were enjoying a break from work, Fortescue announced it was resuming work on Kings.

This did not come as a surprise; chief executive Nev Power had signalled a number of times in previous weeks the company was likely to continue with Kings after a three-month pause, so that contractors on its Firetail mine project could move straight over.

But, reflecting on this, it was a momentous change after the dramatic job cuts announced in September.

The only other change that was even more dramatic was in the iron ore price.

That’s the kind of wild fluctuation we’ve previously seen with the exchange rate, yet, ironically, the Aussie dollar now seems very comfortably settled around US105 cents. Whether it stays around that exchange rate is, of course, anybody’s guess.

That is one of the great challenges facing people in business; markets are inherently unpredictable and they tend to overshoot on the way up and on the way down (just look at the iron ore price).

Trying to intervene, in order to regulate or even mitigate market fluctuations, is fraught. The outcome in these cases can be even more volatile.

In many ways, intervention just adds another layer of uncertainty.

In this context, it’s interesting to look at some of the major transac-tions that feature in WA Business News’ annual corporate finance review.

They show large international companies, with the buffer of a strong balance sheet, taking a longterm view on Australian business opportunities.

In the oil and gas sector, for instance, three international groups have bought into, or lifted their stake in the Browse gas fields, even though the Browse development has generated more political heat than any other planned development in the country.

Japan’s MIMI (Mitsui and Mitsubishi), Shell and PetroChina have, between them, invested more than $6 billion to acquire equity in the Browse gas fields.

Their view is that, irrespective of the current political debate over development options - a gas hub at James Price Point, a floating LNG plant, a pipeline to one of the gas plants on the Burrup - there is still huge value in the gas itself.

Cameco has looked past the slump in uranium prices (which has knocked the share price of Africa-focused miner Paladin Energy) and the regulatory uncertainty surrounding project approvals (which has knocked aspiring mine developer Toro Energy) to focus on the longterm value inherent in large uranium deposits.

Judicial uncertainty is another challenge for the business world. Like markets, such rulings can be unpredictable. Sometimes they deliver nice surprises.

A small but fascinating local example is the State Administrative Tribunal’s ruling early this month on eligibility for the First Home Owners Grant.

It found that a homebuyer was eligible for the grant, even though she had bought her house in partnership with a company.

An astute business leader should aim to ensure they have enough financial strength to withstand unexpected fluctuations, while being nimble enough to take advantage of unexpected opportunities.

And, while governments can never deliver full certainty, they can help business by articulating clear longterm strategies that guide their policy making.

The details will always change but if there is a strategy that stays in place, that provides a base for business people to work from.