Centres of excellence can drive prosperity

Perth should foster a centre of excellence that brings together like-minded individuals, businesses and, sometimes, public institutions to serve the resources sector.

COMPANIES and countries are increasingly competing on a global basis. Consequently, if you are not globally competitive, over time you will not grow and value will not be created.

International resources customers don’t buy our commodities just because they come from Australia. We don’t have a monopoly on tier-one, low-cost resources. Our customers buy from us because they get the right product at the right price with security of supply – and productivity is crucial to us meeting these expectations.

So what is productivity?

Productivity is what we all get as a community in final goods and services for what we put in through our labour, capital and other factors of production.

I’ve heard it said that a country’s ability to improve its standard of living over time depends on its ability to raise its output per worker. Along with quality, certainty of supply and innovation, productivity is the key driver of success.

So without productivity it is hard to see how Australia can address the challenges of climate change, an ageing population and a high exchange rate.

But while we hear calls to increase productivity, there is less detail on how we might do that.

What I have called ‘centres of excellence’ provide an approach to leverage Australia’s resources strength, drive productivity and therefore underpin living standards.

Let me stress, I am not advocating picking winners. Taking a bet on one sector is not the answer. A better long-term strategy is to have a balance of manufacturing, resources and services.

This is particularly true as the new global economy thrives through innovation, skills and knowledge that upgrade the industrial base. Silicon Valley is an obvious example of this happening in a particular region, through a cluster developing and then growing.

There is no reason why we can’t see examples in Australia.

We have a number of places where clusters of resource companies are both cooperating and competing already; and the outcomes are critical to meet the global demand for resources. When people around the world think of resources, and smart application of skills, technology and capital, we want them to think of Australia.

In this way, centres of excellence drive productivity.

They form critical masses of linked industries and institutions which, when combined, are highly successful global competitors creating good jobs, innovation and growth.

I have already referred to Silicon Valley as a centre of excellence. Stanford University is based there, Berkeley and Carnegie Mellon have campuses there, as do the major service firms Jones Day, Pricewaterhouse Coopers and Deloitte – and, of course, venture capitalists Kleiner Perkins.

In fact, eight out of 10 new jobs in Silicon Valley are created by small business and one in five workers are employed in manufacturing.

As you can see from this example, centres of excellence by nature prosper by attracting a varied set of related companies and institutions that often compete against each other – while drawing strength from each other.

They create value for both the region and country, they increase productivity and they stimulate new business opportunities.

Because of the changing nature of international competition, companies are choosing to invest in the most productive regions. An obvious example is back-office processing moving to the most productive, though not necessarily the cheapest, countries.

A less obvious example is Caterpillar and NCR relocating the manufacturing of some major product lines to the US from low-wage countries.

The most successful regions don’t try to be the most competitive at everything but like Silicon Valley, Chennai and even luxury shoes in areas of Italy, they focus on where they have a competitive advantage based on knowledge, skill, innovation – and in some instances, a natural endowment.

Focusing in terms of centres of excellence may give us a vision and plan for the future that helps address the economic uncertainty that people and markets are feeling today.

What’s clear is that there is significant potential for the resources sector to foster centres of excellence around Darwin, Perth, Townsville, Brisbane or Adelaide.

All we need is a shared ambition to capitalise on the value co-location brings to the development of skills and investment, along with a consensus to avoid creating obstacles to productivity growth. That means employees, employers and governments fostering collaboration, rather than regulation.

This is where a combined focus on multi-factor productivity becomes important – maximising the application of skills and training, taking a long-term view of returns on capital and ensuring that regulations are outcome driven.

Let me give you an example.

There is currently $78 billion committed to iron ore projects in the Pilbara and it has been forecast that the industry will require more than 60,000 more workers by 2020. To deliver on these projects, the workforce will need specific skills that can’t be taught quickly.

This is a perfect example of where industry can work strategically with state and local governments and universities to help create a centre of excellence.

Centres of excellence don’t have to be started from scratch.

The Northern Territory Government sees Darwin as a centre for oil and gas activities including operation, maintenance and workforce development.

Darwin not only services major resource businesses – it also has major agricultural industries in beef, fruit and seafood – and is both a strong defence force base and a staging centre for the United Nations.

Darwin has good primary and secondary schools and a growing university and infrastructure, such as the Adelaide-Darwin rail link.

There is no reason the Darwin region shouldn’t become a major centre of excellence and a major city with benefits for the whole Australian economy.

What it will take is a strong spirit of cooperation between business, every level of government and institutions.

• This is an edited extract from BHP Billiton chairman Jacques Nasser’s address to an American Chamber of Commerce function on August 10. 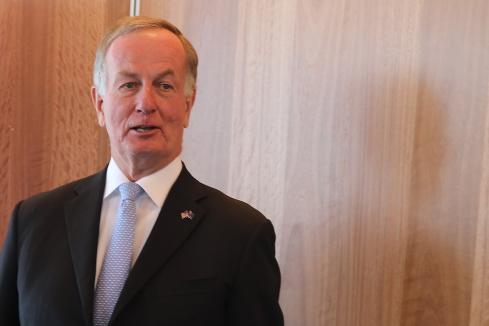