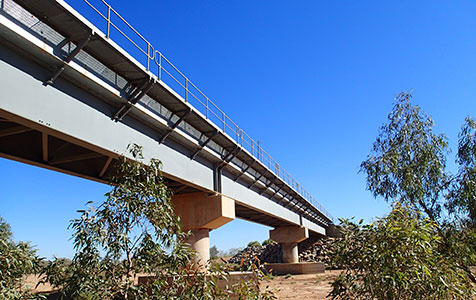 A rail bridge similar to those Central Systems will build at Roy Hill.

Centrals’ $100 million subcontract for the construction of rail bridges at the project represents the company's largest ever contract win.

Central Systems will build 11 bridges along the proposed 340-kilometre rail line from the Roy Hill mine to port and stockyard facilities near Port Hedland.

The contract is scheduled to commence this month and be completed by December 2014.

The company plans to handle the majority of the works, but long-term indigenous contracting partner Pilbara Logistics will provide a number of support services to the project.

"The Centrals team has worked hard over the last three to four years to grow and transform the company into a major civil construction and remedial services contractor," Central Systems director Richard Eden said.

"In our view, this contract award is a significant endorsement of our capabilities and capacity to execute larger-scale construction projects for our clients."

McConnell Dowell has meanwhile been awarded a $455 million engineering, procurement and construction contract for the port component of the project.

Site works are expected to commence later this year with completion set for mid-2015.

MacDow will have built 10 out of the 14 iron ore load out wharves in Port Hedland upon the completion of the project.

The Centrals and MacDow deals come in the wake of a month in which several Western Australia-based mining services companies were awarded big contracts for the mine.

BGC Contracting announced late last month that it had been awarded a $420 million package of works including civil earthworks, concrete works and general infrastructure for the port component of the project.

Alinta Energy was also granted regulatory approval to supply electricity to the project.