Central Park management has confirmed plans to refurbish the office tower's lobby and forecourt, and has said the integrity of Brian McKay's artworks will be maintained. 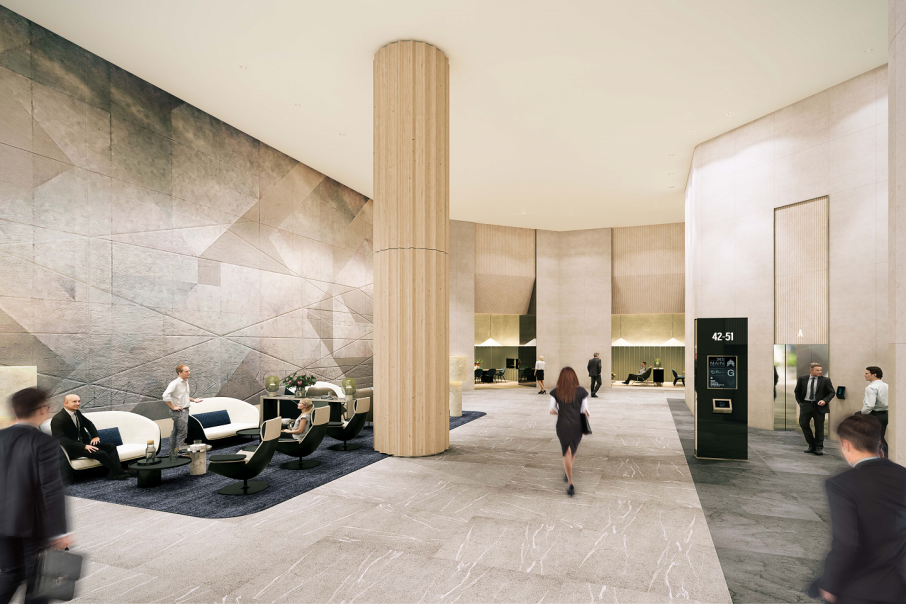 An artist impression of the proposed new lobby at Central Park.

Central Park management has confirmed plans to refurbish the office tower's lobby and forecourt, and has said the integrity of Brian McKay's artworks will be maintained.

The building, owned by Perron Group and Frasers Property Australia and managed by JLL, is home to a number of large companies including Rio Tinto, Grant Thornton, DLA Piper and AEMO.

The refurbishment has been designed by Woods Bagot, and Built Pty Limited, supported by NS Projects, will carry out the construction contract.

Central Park management said the new lobby would feature meeting spaces and a business lounge and was designed to encourage a sense of community and work-life balance.

“Central Park is one of Perth’s most iconic buildings and we are proud to house established Western Australian, national and international companies,” Mr Ward said.

“The refurbishment is designed to enhance the work-life balance and overall experience of our customers, their staff and visitors to Central Park.”

Art Gallery of WA chair Janet Holmes à Court along with academics, artists and architects protested the planned relocation of the integrated artwork in the foyer of Central Park to accommodate the refurbishment.

At a protest in October, Ms Holmes à Court said Mitsubishi Chemical Corporation, the maker of the panels the murals were etched on, had provided technical advice that the panels could not be removed without damage to the artwork.

Perth Public Art Foundation executive director Nathan Giles said the 1992 Brian McKay commission was a rare example of an artist being an integral part of the building design team and it should be maintained at all costs.

A Central Park management spokesperson said they had engaged artwork preservation consultants and appointed them caretakers to protect the integrity of the artwork.

"The largest artwork in the existing lobby space will not be removed and the artwork preservation consultants have provided input to ensure the piece is fully protected for the duration of works," the spokesperson told Business News.

"The smaller artworks will remain features of the existing wall they are currently on and while they will be moved slightly to fit with the new architecture, the artwork preservation consultants will ensure the integrity of the artworks is protected during this process."

Ms Holmes à Court said the people who worked to convince the owners to leave the Brian McKay mural were pleased the large artwork would not be removed.

"However, we are dreadfully sorry that the four smaller works will each be moved resulting in the artist's original intention being lost," Ms Holmes à Court told Business News.

"Brian's concept for the works in their marble alcoves was an elegant and sophisticated installation.

"Whilst options were considered as a compromise, the only possible option that protected the artwork and its integrity was to have it left untouched."

The 5,000 square metre landscaped park, on the corner of William and Hay Streets, will not be affected by the refurbishment works.

It will be the propety's first renovation since its completion in 1992.

Central Park said the works are to be completed by 2020.