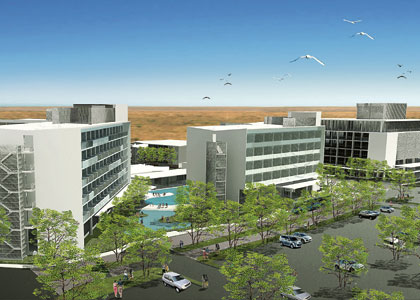 MILESTONE: The Landing, a 650-room hotel and apartment development, obtained approval from the Town of Port Hedland last week.

Centauri’s North West Infrastructure Fund 1 is the major investor in The Landing, a 650-room hotel and apartment development.

Its co-investor in the project is FMR, established by Mr Bartlett following the sale of his majority stake in mining contractor Barminco.

The Landing comprises several elements: 240 apartments in a number of two-storey blocks; about 400 hotel rooms in two separate buildings; and a six-storey commercial office, convention and retail centre including multi-storey car parking.

The development passed a major milestone last week when it obtained approval from the Town of Port Hedland.

Centauri asset development manager Rob Cornish said the development would proceed in stages, and would take about 18 months to complete.

It is next door to the Port Tourist Park caravan and backpacker facility and the BP truckstop, which are also part of Centauri’s portfolio and are currently being upgraded.

While the project’s main driver is the surging resources sector, Centauri has committed to providing about 20 per cent of the rooms in the hotel for tourism, during the peak tourism season.

The apartments are being fabricated offshore, and will be erected on site by local contractor Custom Constructions.

“They will be built with quality materials and designed to allow for a rapid three- to four-month construction schedule,” Mr Cornish said.

The hotel will be a five-star, five-storey resort style development.

“The hotel will be invaluable to the local economy well beyond the current peak in activity,” Mr Cornish added.

Reflecting the very tight accommodation market in Port Hedland, 38 of the rooms will be set aside for staff, with the balance being available for sale.

Mr Cornish said the development will be mostly equity financed, including mezzanine finance, and will also utilise supplier financing.

That contrasts with traditional property developments that use a large portion of bank debt.

The Landing is the second major hotel development planned for Port Hedland, which suffers from an acute shortage of accommodation as mining companies proceed apace with their own expansion projects.

Mirvac is planning to develop a 178-room hotel and 116 residential dwellings on the old hospital site, on the oceanfront.

Another major development, proposed by BHP Billiton, is the construction of a camp, next to the airport, that will be able to accommodate 6,000 construction workers.

In addition, the state government is investing in the town’s infrastructure and releasing land for further residential, industrial and commercial developments.

Mr Cornich said Centauri was working on a number of other early stage development opportunities.

The group has established four funds, targeting north-west infrastructure, Kimberley agriculture and renewable energy, with the money contributed by high net worth individuals.