Perth-based marine farming company Cell Aquaculture has flagged a move into property investment, signing a heads of agreement to acquire two new projects in Asia for $83 million in an all-scrip bid. 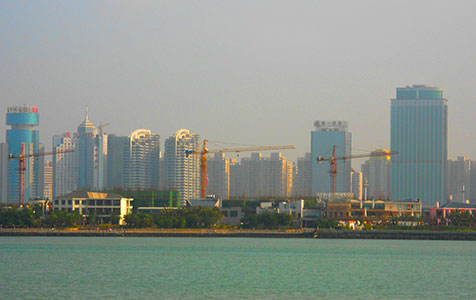 The Chinese city of Haikou on Hainan Island.

Perth-based marine farming company Cell Aquaculture has flagged a move into property investment, signing a heads of agreement to acquire two new projects in Asia for $83 million in an all-scrip bid.

CAQ announced it had agreed to purchase the first and only shopping centre to be constructed in a free trade zone in China, located in the Haikou free trade zone on Hainan Island.

The centre will be constructed on a 44,000 square metre property and will consist of several multi-storey buildings containing factories, warehouses and a retail complex.

It is due to open in April next year, with the lettable area of the property expected to be primarily tenanted by diamond and jewellery businesses.

Haikou is a tax-free zone and is currently the only Chinese free trade zone that allows tourist tour programs.

CAQ has also agreed to purchase the Roxy Casino in Cambodia.

The casino, which is currently undergoing renovations, consists of gaming facilities, hotel rooms and a restaurant and is set to re-open in May.

Under the terms of a heads of agreement between CAQ and vendors Noble Rate, Tang Dashun and Beijing Properties, CAQ will acquire 100 per cent ownership of the projects in exchange for about 553 million shares at an issue price of 15 cents per share.

The agreement is subject to a number of conditions, including shareholder and regulatory approvals.

CAQ, which recommenced trading on the ASX on a reconstructed basis in September last year after appointing administrators in 2012, said it may be required to re-comply with ASX listing rules within the coming months.