40under40: First Amongst Equals winner Jahna Cedar has built a career blending her business acumen and indigenous heritage. 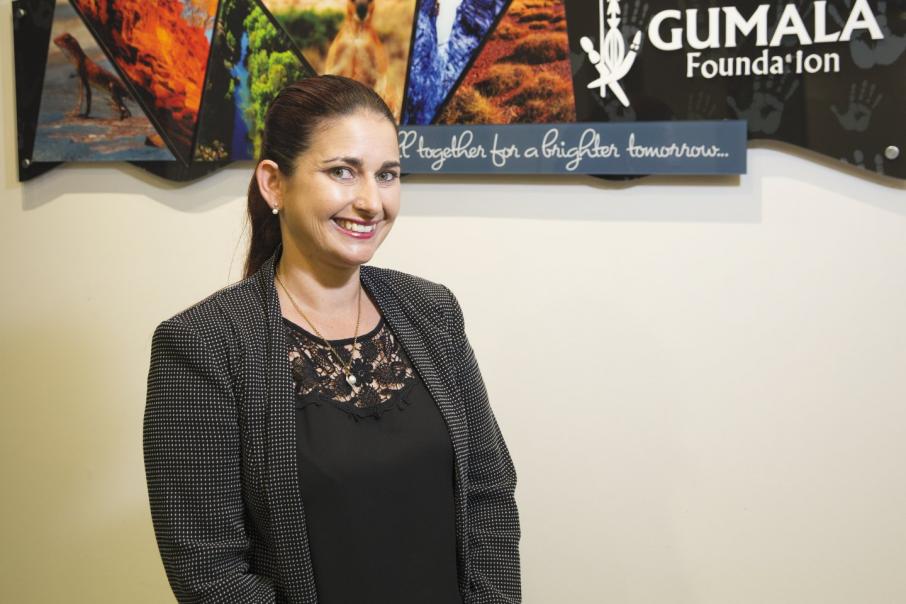 40under40: First Amongst Equals winner Jahna Cedar has built a career blending her business acumen and indigenous heritage.

Jahna Cedar heads an organisation that has experienced a dramatic fall in revenue over the past three years on a scale many would consider calamitous.

However, rather than becoming overwhelmed by the situation she has inherited, Ms Cedar has instead focused on the opportunities.

“Yes, our revenue fell by about 80 per cent, but I don’t see that as a negative,” Ms Cedar told Business News.

“That establishes opportunities for strategic partnerships and stakeholder alliances.”

Ms Cedar is the executive officer of the Gumala Aboriginal Corporation, which was established in 1996 after the Banyjima, Innawonga and Nyiyaparli people of the Pilbara struck a land use agreement with Rio Tinto.

Its core purpose is to manage the General Gumala Foundation, a charitable trust that redistributes land compensation payments from Rio’s Yandi mine.

Ms Cedar is a Nyiyaparli traditional owner from Port Hedland and became a director of GAC in 2013.

That was a result of its agreement with Rio Tinto, which ties payments to the value of ore mined at Yandi, as well as the amount of ground disturbance.

Revenue has since fallen dramatically, because of lower iron ore prices and reduced ground disturbance.

GAC went through a tumultuous period as it adjusted to the decline in revenue, and Ms Cedar has played a lead role in helping to reposition the organisation.

Ms Cedar brought a diverse professional background to her role at GAC, starting with her time as a human resources manager at BHP Billiton.

She held several HR and project management roles while completing a degree in business management, before establishing her own HR consultancy in Port Hedland.

“The opportunity to create my own business stemmed from seeing a gap in the market that I could apply my skill to, but also the flexibility to work around my young children,” she said.

Ms Cedar describes the years running her own business as a stepping-stone on her career path.

“I always knew that I wanted to work in an advocacy space and I wanted to assist my homeland communities,” she said.

Her community activism, for which she has won multiple awards, runs in the family.

“Growing up in the Pilbara, I’ve come from a very strong background of indigenous activists and advocates,” said Ms Cedar said, adding she was fortunate to have five generations alive on her indigenous mother’s side of the family.

She became a director of Nyiyaparli Aboriginal Corporation before getting more involved at GAC.

“I was lucky enough to be elected the executive director while we were trying to find a new CEO then being offered the CEO role permanently,” she said.

Her initial focus was on reducing costs and driving operational efficiencies.

Under that process, GAC cut staff from nearly 100 at the peak to 10 currently.

One of the greatest challenges of her career has been managing change.

“Some people fear change as it means the unknown,” Ms Cedar said.

“I have found that focusing on the benefits of change, translating how change can positively affect an individual or group, and communicating the matter concisely is a good methodology.”

She said building a new culture at Gumala had also been difficult.

“A lot of this role is having the cultural decorum to manage those political landscapes; having the three different language groups but also then going out and speaking to stakeholders on behalf of those language groups,” Ms Cedar said.

Meanwhile, GAC has introduced a major shift in the way it delivers its programs.

“We wanted to ensure benefits were delivered in a long-term sustainable manner, so we went from an individual program basis to collective benefits,” Ms Cedar said.

“We had to change focus to ensure the longevity of our business.”

It is also looking to diversify its revenue, by working with other Aboriginal corporations and government agencies.

GAC has also partnered with the Graham ‘Polly’ Farmer Foundation at Tom Price.

Ms Cedar believes one of the strengths of Gumala is its board structure.

“What makes Gumala stand apart from a lot of other Aboriginal corporations is that we are a fully traditional owner board,” she said.

“To me, that’s a great acknowledgement of self-empowerment and self-determination of our people.

“A lot of other boards have independents; don’t get me wrong, we bring in skill sets as needed as sub-committees or advisers, but I’m just so proud of having a strong traditional owner board.”

Empowering and building the capacity of her people is a recurring theme raised by Ms Cedar and she applies it to her own role.

She has a three-year contract at GAC and has an open mind about the next step.

“If someone stays in a positon for too long, that brings in a bit of comfort, and I like to be challenged and kept accountable,” Ms Cedar said.

“My main goal within that three years is to start succession planning for someone to take over.

“If I can skill up as many traditional owners to take positions throughout the business, again that is part of self-determination and meets our strategic objectives.”

Ms Cedar is also focused on her own professional development, with plans to complete an MBA.

“I love learning, I really value education as an amazing opportunity,” she said.

“The more I can learn the better, and the MBA is the next step in that curve.”

Her plans to commence an MBA were deferred after she was one of three Australian women selected to attend the 61st session of the United Nations Commission on the Status of Women, running from March 13-24.

It will be Ms Cedar’s third visit to the UN and she is excited by the opportunity to learn.

“It’s just about having a voice and having international exposure; learning from what other countries are doing and bringing that back to Australia,” she said.

“For me, it’s about how I can bring learnings on indigenous empowerment back to Gumala and make an impact.”

“You have to be a glass-half-full kind of person," she said.

“I’m very optimistic about this business, that’s for sure.”