Cedar Woods Properties is making its first foray into South Australia, with the Perth-based developer being selected by South Australian government agency Renewal SA for a 16.5-hectare urban renewal project near the centre of Adelaide. 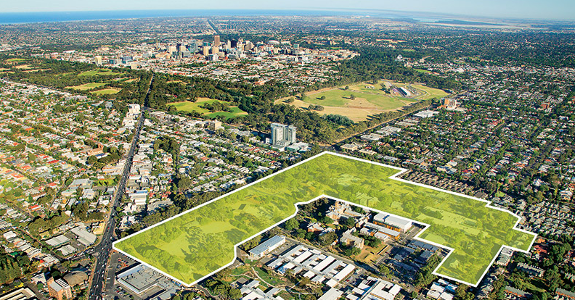 Cedar Woods Properties is making its first foray into South Australia, with the Perth-based developer being selected by South Australian government agency Renewal SA for a 16.5-hectare urban renewal project near the centre of Adelaide.

Renewal SA announced today that Cedar Woods had been selected as its preferred proponent for the Glenside redevelopment site, which was formerly the Glenside Hospital, ahead of two other shortlisted developers, who were not named.

Cedar Woods will partner with a range of South Australian companies, including building firm Qattro, Flightpath Architects, Wallbridge & Gilbert Engineers, Tierra Environment and MasterPlan SA, as well as Perth-based planning firm Hames Sharley to develop a master plan for the site, which is located around two kilometres from the Adelaide CBD.

The historic Glenside Mental Hospital buildings will be retained as part of the development, while Renewal SA has set a density target of between 80 and 100 dwellings per hectare.

It is expected the development will yield around 1,000 apartments or townhouses.

SA Health developed a master plan for the site in 2008, however retail and commercial components in that proposal are not considered to be appropriate for the current market demand.

Renewal SA canvassed the views of nearby residents and other stakeholders in February and March this year, receiving a total of 2,422 submissions, ahead of selecting its shortlist of three developers.

The agency and Cedar Woods will collaborate for the next six months to prepare the master plan.

"We are experienced in delivering high quality outcomes from urban infill sites at various projects across Australia," Mr Archer said.

"The preliminary work we have completed is based on a mix of townhouses and apartments that work with the existing site to provide plenty of public space and preservation of heritage buildings."

South Australian Housing and Development Minister John Rau said Cedar Woods' experience in delivering innovative medium to high density developments was a key element in its selection for the site.

"I have been clear that development on the site must respond to both the site's heritage and environmental features and be done in consultation with the community – and this is exactly what Cedar Woods is proposing," Mr Rau said.

"Open space, sustainability and the heritage buildings are strong features of Cedar Woods' early proposals, and they will now work with Renewal SA and the community to develop a master plan for the site."

Mr Rau said the total number of new jobs which would be created by the development had yet to be finalised.

Cedar Woods is planning to open an Adelaide office to facilitate the development, which is its first in SA.

The developer has long been active in Western Australia, Victoria and Queensland, but historically hadn't pursued opportunities in South Australia.

Cedar Woods managing director Paul Sadleir said Glenside was an ideal opportunity to invest in the state for the first time.

"Our ambitions for Adelaide are long-term and we are pleased to have the opportunity to secure a landmark site to enter the South Australian market," Mr Sadleir said.

"Glenside fits that objective ... it is an exceptional opportunity for urban renewal and deserving of world-class development.

"We will be looking to use our experience and knowledge from projects in Victoria and Western Australia to make this project of the highest quality.

"It is rare to come across a site so well-located in a capital city and in a sought-after suburb."