At least $100 million has been earmarked for initiatives in the Collie district as the state government targets its support for the area ahead of potential coal shutdowns, although there is debate about the impact on other regional towns. 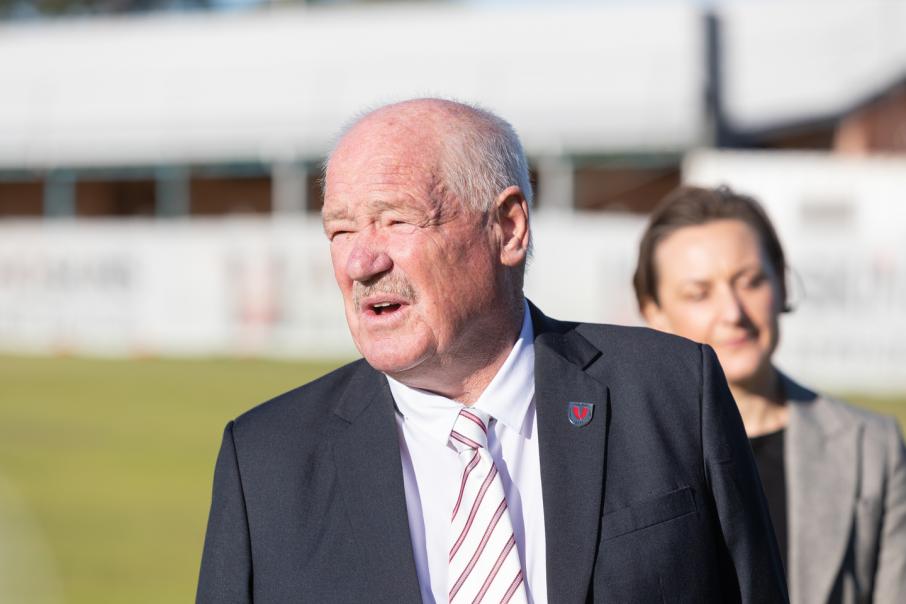 Mick Murray represents the electorate of Collie-Preston in state parliament, and has held the seat despite a tight margin. Photo: Gabriel Oliveira

The state government is pumping money into Collie ahead of job losses associated with coal-sector changes.

At least $100 million has been earmarked for initiatives in the Collie district as the state government targets its support for the area ahead of potential coal shutdowns, although there is debate about the impact on other regional towns.

The Muja C coal power station will be shuttered by 2024 in a move that will cost up to 80 jobs, the government revealed in August last year.

A further 700 full-time equivalent workers are employed at two coal mining companies nearby, which supply Synergy and Bluewaters power stations.

The long-term future of those workers is uncertain, as it is anticipated the state will gradually cut coal usage. 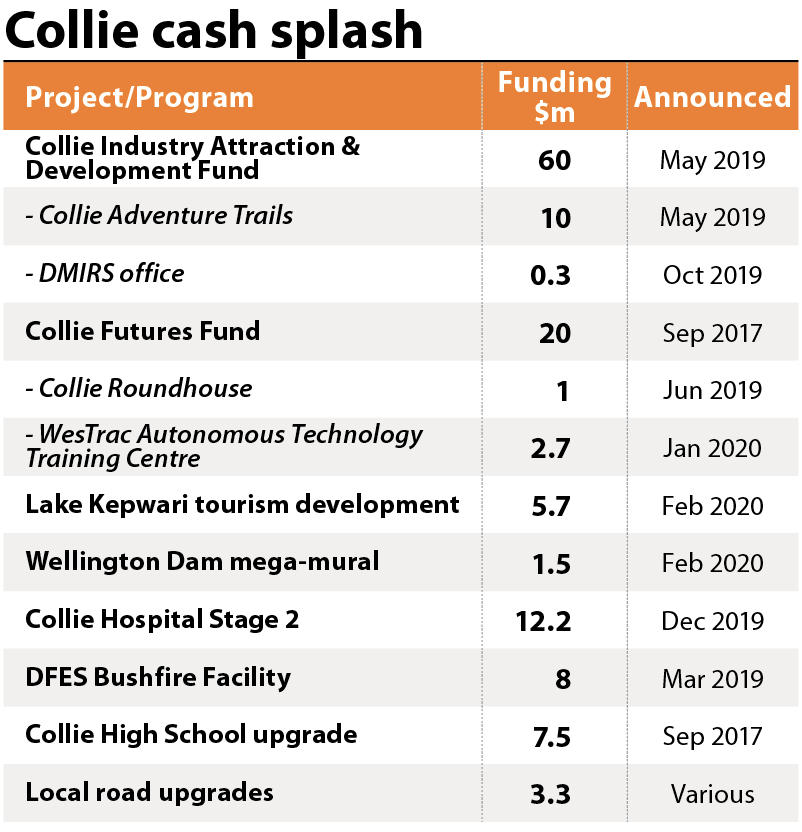 The industry attraction fund has already been committed to support three projects, according to ministerial press releases, including Collie Adventure Trails (see table).

The state government hopes the trails will attract 12,000 visitors annually, bringing an estimated spend of $3.8 million.

Despite these pledges, the fund will not be open to applications until later this year, a spokesperson for the Department of Jobs Tourism Science and Innovation said.

The fund will also hand Malaga manufacturer Frontline Fire & Rescue Equipment $2.5 million to build a manufacturing facility in Collie, which the government said would create 17 jobs.

That came as the company won two Department of Fire and Emergency Services contracts worth a combined $125 million in December to build 150 firefighting tankers.

The department said a future $47.5 million vehicle contract would also include a requirement some of the work was undertaken in Collie.

Further initiatives include a $1.5 million Wellington Dam mega-mural, the $5.7 million Lake Kepwari tourism development, and $12.2 million for a stage two redevelopment of the Collie Hospital.

The Collie Futures Fund has distributed grants to at least 13 small projects, including for feasibility work on a (now shelved) synfuels facility, and a modular behind-the-grid data centre.

A spokesperson for Westrac said the fund was not the key factor for choosing the location.

Land availability, a skilled local mining workforce, and proximity to Perth were among the appeals.

When asked by Business News about the process to select projects for funding, a spokesperson for the Department of Jobs Tourism Science and Innovation said the department, the South West Development Commission, and other agencies assessed proposals.

“Potential to create new jobs and other economic benefits are considered as part of the application process,” the spokesperson said.

While the government hopes the cash will keep Collie alive, there are concerns from elsewhere in the region.

About 80 kilometres south of Collie is Bridgetown, in the Shire of Bridgetown-Greenbushes.

There’s a big mine development at Greenbushes, part of which has been temporarily delayed due to low lithium prices.

Owner Talison Lithium has a preference for employees to live in the local area, but the state government has previously floated a plan to bus workers in from Collie.

Community representatives opposed that plan, however, fearing it would stop the shire’s growth, propping up Collie at the expense of Bridgetown.

Now there’s hope the state government will support a handful of projects in Bridgetown to provide a post-pandemic boost.

Those include an upgrade of the Bridgetown town hall, historical railway station, and the Blackwood River foreshore.

Bridgetown Pottery-Restaurant owner Pip Mills told Business News she understood the reasons for the transition under way in Collie, but hoped Bridgetown and other regional communities would not be overlooked, and that the expansion of the nearby Greenbushes mine would be a game-changing investment for the community.

In the near term, however, there’s a concern about slowing activity at the Greenbushes mine flowing onto the community.

“There’s a downturn in activity there [at the mine] at the moment,” Ms Mills said.

“In a town like Bridgetown, a loss of 10 jobs is massive.”

Ms Mills said funding of local projects would have an immediate impact.

Shire president John Nicholas told Business News while he understood the government wanted to rejuvenate the Collie economy, the Bridgetown district had suffered during the pandemic and had shovel-ready projects awaiting support.

He said while the area generated substantial royalty income through the mine, not enough was returned to invest in the community.