Case of Swan being lost to distant markets

WA beer drinkers may be better served if the Japanese owners sold the ailing brand to local investors. 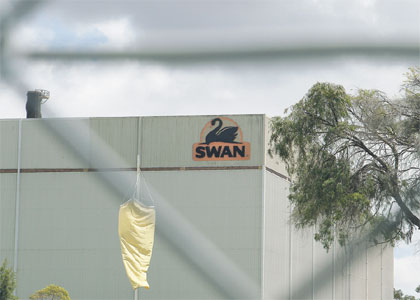 GOING FLAT: Swan Brewing’s Canning Vale operations and Hannan’s Lager, once owned by Swan and which faded after a brief revival in the 1980s.

WA beer drinkers may be better served if the Japanese owners sold the ailing brand to local investors.

MORE gnashing of teeth was heard last week as the Swan Brewery was closed, ending a history of manufacturing what has been the state’s beer for a very long time.

While it is a bit sad to see any business moved interstate, especially when it is a brand that has etched itself into Western Australia’s history, the brewery has been in steady decline since at least the late 1980s.

Back then, it was owned by Alan Bond who had grand plans for Swan, which he bought in 1981, and actually made a couple of canny moves.

For instance, Mr Bond launched Swan Premium, which was an early effort at making an upmarket beer in WA, a move which included a fancy shaped bottle (as opposed to the traditional stubby) and was promoted on the giant spinnakers of his international racing yachts.

He also pushed the Swan Special Light beer into international markets, notably Muslim countries where alcohol was not tolerated.

At less than one per cent alcohol, it was actually a popular export product, while local drinkers preferred Swan Gold, an innovative and successful forerunner of myriad midstrength beers we have today.

It is intriguing that a brewery that had nearly the whole market, was a product innovator, enjoyed massive production capacity and had successfully entered the export game could so rapidly go into decline.

To be fair, part of Swan’s dominance came through buying up other WA breweries over the decades and ultimately letting those brands fade. Kalgoorlie’s Hannan’s Lager, apart from a brief revival in the 1980s, is a good example.

Perhaps if Mr Bond had concentrated on employing his WA beer assets to their fullest potential, he could have succeeded where so many others have failed - in competing with Australian and overseas breweries from WA.

At the time, WA enjoyed some great advantages. Back freight to the east coast was cheap because WA was a net importer of goods.

Labour was, relatively speaking, inexpensive and many of the environmental laws that make brewing so difficult today (water consumption and waste treatment) were less of an issue at the time.

Unfortunately, Mr Bond became distracted, initially through the mergers and acquisitions mania that took hold of the beer market with the purchase of Castlemaine XXXX in Queensland, which provided a better and more convenient base from which to attack the bigger east coast market. In reality, there were few synergies to be gained from that move, so Swan became a second-class citizen in the Bond Corp empire. History showed that the Bond Corp acquisition damaged the Castlemaine brand in parochial Queensland and opened the door to a feisty local competitor there, Powers.

Perhaps, Mr Bond would have been smarter to have been the newcomer taking on the incumbent from his strong WA base, rather than using mountains of debt to just buy all and sundry.

Of course, the modus operandi of Bond Corp - highly leveraged acquisitions - was not limited to breweries. So if the Castlemaine foray was a bit of a distraction, subsequent bigger expansions into new fields put further distance between Swan and its owner, at least in terms of relevance.

It is a shame. The Canning Vale brewery was built to very high standards with a production capacity that was never even close to being fully utilised. Unless Swan was going to brew beer for other markets, and project WA to the outside world, it was a serious case of over investment.

With the demise of Mr Bond, Swan became part of Lion Nathan, a minor brand for the New Zealand group in a small regional market a long way away from headquarters.

If Swan was underdone under Bond Corp, it was all but forgotten by Lion Nathan, barely a footnote in the annual report.

The business here languished as competitors such Carlton & United Breweries started to make inroads into the WA market and Lion Nathan cannibalised its own market share by preferring to develop national brands at the expense of Swan.

By 1998, CUB had one third of the WA market, from all but a standing start at the beginning of the decade, buoyed by successes such as Victoria Bitter and its upmarket Crown Lager.

By the next year it claimed 40 per cent, that is how fast the Swan’s market share evaporated.

A good example was the dumping of the iconic local beer Swan Gold, which spawned the mid-strength category, in favour of the dazzlingly dull new Mdstrength brand. Where is that now? I hear you ask. The neglect also allowed smaller producers like the Matilda Bay Brewing Company (which CUB later bought) to thrive at the premium end of the market.

There can’t be much hope that Lion will continue the innovation that has earned Little Creatures its success, just as CUB allowed Matilda Bay to slide into obscurity, living only through the Redback brand, which still thrives.

If it is a shame that the Swan brewery must shut down under such circumstances, then it is because it is so inconsequential in the hands of a big player like Kirin.

The WA market would be better served if Kirin sold off Swan to local investors who might make a go of it by innovating and challenging rival international beers. But that is not how big brand companies operate.

And, besides, a new nimble local Swan would never have the advantages that Mr Bond inherited when he acquired the original Swan Brewery, or even a decade ago when the smart thinkers at Little Creatures founded their company.

The accountants at Lion are probably eyeing the opportunity to sell the land they operate on at Canning Vale, after all it is a significant industrial estate in a state where such land is in short supply.

Who needs to worry about selling beer?