A WORLD-LEADING wave energy and clean technology developer based in Western Australia has its sights set on exporting its expertise and establishing itself as a global electricity utility. 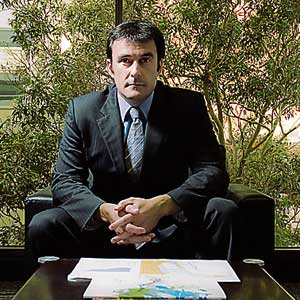 A WORLD-LEADING wave energy and clean technology developer based in Western Australia has its sights set on exporting its expertise and establishing itself as a global electricity utility.

West Perth-based Carnegie Corporation has hit a number of significant milestones in recent months, including securing a $250 million investment in April.

Carnegie also organised a deal in May with its UK-based joint venture partner, Renewable Energy Holdings, under which it bought all the intellectual property and global development rights for the CETO wave energy technology.

The CETO system consists of an array of submerged buoys tethered to sea pump units. These are driven by passing waves and swell, creating highly pressurised water that's delivered to hydroelectric turbines on land via a pipeline.

"The Investec deal is by far the largest financial commitment to a wave energy project anywhere in the world," Dr Ottaviano told WA Business News.

"Going back five years ago, that sort of deal simply wouldn't have happened.

"It's a reflection of where the world is going and where Australia is going."

The Investec money will help fund much of Carnegie's $300 million Commercial Demonstration Wave Power project in southern Australia, which will be capable of generating 50 megawatts, enough power for almost 40,000 homes.

Dr Ottaviano said the transaction with Renewable Energy Holdings finally brought the 'know-how' and intellectual property together in one entity after initial funding for the technology proved much easier to raise in the UK than Australia.

"Carnegie was, and has always been, the technology developer, it happened in Perth and Fremantle, but we've never actually owned the IP 100 per cent," he said.

"Now we get access and control of the IP but also, rather than focus on the Southern Hemisphere we're now focused globally, and some of those Northern Hemisphere markets will be hugely attractive."

Securing contracts in Northern Hemisphere electricity markets and adhering to an ambitious business model is now the focus for Carnegie.

"Our business model is to be a utility; we won't be selling CETO units but we will be selling electricity to consumers."

Synergy's memorandum of understanding to purchase the first electricity Carnegie generates in WA, bundle it up and sell it to its retail market is an example of how the model hopes to work.

Dr Ottaviano is pleased to see state and federal governments focusing more on wave energy, especially since WA is the world's largest and most consistent wave energy resource.

"The WA government has given us $12.5 million in the last few months to support the first wave energy project in WA, and that's extraordinary in itself," he said.

"That's the largest government grant to a wave energy company or project anywhere in Australia."

Albany is one of five sites currently being evaluated by Carnegie, with future projects intended along Australia's coastline.

A $300 million federal government fund expected in August for wave and thermal demonstration projects, and last week's report from the World Wildlife Fund estimating wave energy will create 14,000 jobs by 2050, jointly reiterate the importance of the renewable energy market.