Carnarvon Petroleum has launched a $50 million share placement, with the funds set to primarily progress the commercialisation of the Dorado oil discovery, as part of its Phoenix project, located in the North West Shelf. 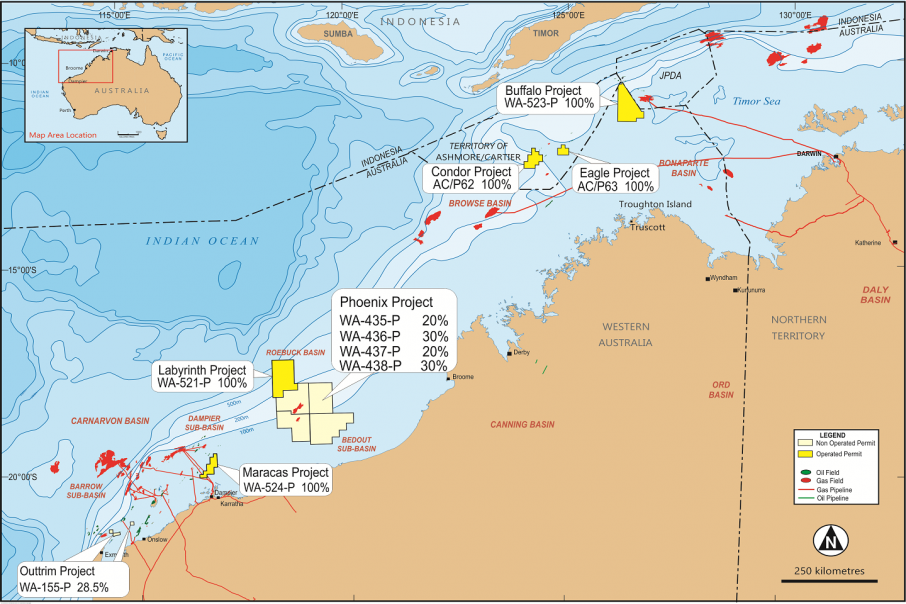 The Dorado and Roc wells are located in the Phoenix project.

Carnarvon Petroleum has launched a $50 million share placement, with the funds set to primarily progress the commercialisation of the Dorado oil discovery, as part of its Phoenix project, located in the North West Shelf.

Under the placement, which is not underwritten, Carnarvon will issue 151.6 million shares at a price of 33 cents per share.

The issue price represents a 9.1 per cent discount to its 30-day volume-weighted average price of 36.3 cents per share.

Euroz Securities and RBC Capital Markets will act as joint lead managers to the placement.

In a statement, Carnarvon said the raising would go towards the appraisal of its Dorado discovery in the Bedout Basin, located north of Port Hedland.

This would occur by starting drilling the Dorado-2 and Dorado-3 wells in April, early engineering and design studies, and potential 3D seismic imaging.

Canarvon will be using a Noble Tom Prosser rig for the drilling.

The capital would also fund the prospective Roc South-1 exploration well, which is located between the Roc and Dorado fields.

Both Roc and Dorado are part of its Phoenix project.

The appraisal program for the Dorado-2 and Dorado-3 wells is budgeted at $40 million to $55 million, and the exploration program targeting the Roc South-1 well has a cost estimate of $10 million to $15 million.

The Dorado and Roc fields are operated by Santos, with Carnarvon holding a 20 per cent stake of the wells

In the December quarter, Carnarvon spent $1.2 million on exploration activities at the North West Shelf, and finished the quarter with total cash holdings of $48.3 million.

In July, shares in the company were up 57 per cent in one day, after the company revealed its joint venture partner, Quadrant Energy, had made a significant oil discovery at Dorado.

Quadrant was acquired by Santos in November for $US2.15 billion ($2.95 billion).

Carnarvon also has a further promising project in the Timor Sea called Buffalo, and in August the company said Buffalo would be economically viable.

Shares in Carnarvon are in a trading halt, they last traded at 37 cents each.