Motor vehicles sales in Western Australia for the year to November are down 8.5 per cent on the same period last year, with sports utility vehicles the only part of the market that held up. 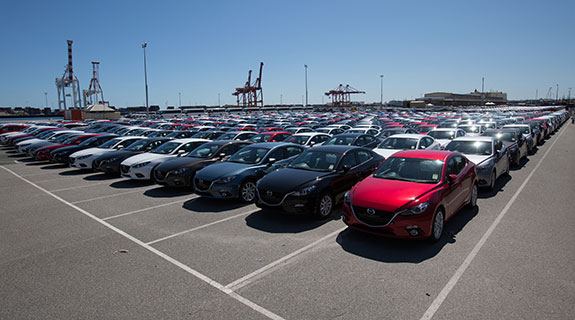 Car sales are a yardstick for economic performance.

Motor vehicles sales in Western Australia for the year to November are down 8.5 per cent on the same period last year, with sports utility vehicles the only part of the market that held up.

The biggest sector, passenger vehicle sales, shrunk 15.1 per cent to 39,213 for the 11 month period, with subsectors micro vehicles down 41.9 per cent and upper large vehicles 40.6 per cent lower.

Sports utility vehicles were up 3.9 per cent to 36,138, while light and heavy commercial vehicles fell 13.3 per cent and 12.9 per cent respectively.

Month on month the numbers were also sour, falling 1.7 per cent overall.

Recent GDP numbers showed spending on vehicles in WA had fallen 5 per cent for the September quarter.

Toyota WA managing director Mark Lauren said WA's performance was poor compared with the national figures, which showed growth of 3.9 per cent for the year to date.

"If you look at the WA market in isolation, we're the only state in Australia that's seen a decline," he said.

A major factor was the mining slowdown, he said, which had dramatically reduced commercial vehicle demand among resources companies and contractors.

Similarly, consumer demand was lower, although part of the fall in passenger vehicle sales was due to a shift to special utility vehicles, he said.

They provided greater flexibiltiy for consumers and were becoming a growth market.

Mr Lauren said he expected similar volumes next year as the market stabilised, with 2017 anticipated to be a return to growth.

That will be driven by consumer confidence, he said, although already the move to a new prime minister was helping.

Some of the largest brands were well down for the year to date, including Toyota, which fell 11.3 per cent to 19,433.

Mr Lauren said Toyota was continuing to maintain its market share, which was about a fifth of the market.