Western Australia’s property developers hope the physical isolation that has helped mitigate the worst of COVID-19 in this state will also insulate the local apartment market from a contagion of a different kind. 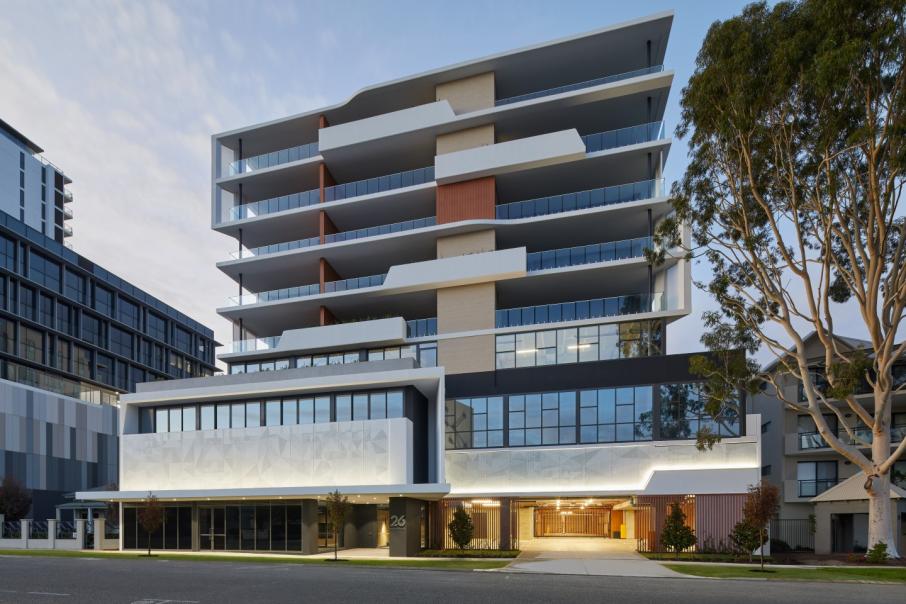 Stirling Capital says apartment valuations at its 26 on Charles mixed-use development in South Perth have not yet been affected by COVID-19.

Prices and sales of apartments are stable, but developers are calling for more stamp duty reform.

Western Australia’s property developers hope the physical isolation that has helped mitigate the worst of COVID-19 in this state will also insulate the local apartment market from a contagion of a different kind.

While sales of off-the-plan apartments on the east coast are reportedly down 15 per cent or more in recent weeks, that trend is yet to fully materialise in Perth, at least anecdotally.

Apartments in central Perth have remained relatively resilient during the past three years in terms of maintaining their resale values, according to research analysts PropertyESP.

Director Samantha Reece said this resilience, paired with Perth’s location, had so far buffered the market from the economic fallout of COVID-19.

“For the first time in history we are actually glad that we’re isolated,” Ms Reece told Business News.

“While there will be some national companies that feel the effect from the east coast – there is a bit more of a lag happening there than here – those companies based in WA, I believe, will actually continue on business as usual.”

That appears to be the case for Subiaco-based Stirling Capital, which recently achieved practical completion at its 26 on Charles mixed-use development in South Perth.

“I’ve had all the major valuers through our Charles Street project and we’ve had no problem.

“People are waiting to see if there’s going to be those sorts of big drops that have been reported [on the east coast]. We didn’t have a lot of foreign buyers anyway, so I don’t see as much impact.”

Mr Filippi said the market’s saving grace could be the resources sector, as one of the key drivers of the state’s economic activity.

“The fact is, WA is still ticking along, so everything is indicating that maybe WA and Darwin will be the least affected by all of this,” he said.

MGroup managing director Lloyd Clark said there had been less disruption on projects than initially anticipated, with inquiries returning just as quickly as Perth moved through the easing of restrictions.

Mr Clark said inquiries had also tended to be more qualified and ready to buy.

Given that market confidence, the group is pushing ahead with plans to start construction on its M/27 apartment development in Fremantle.

“In terms of valuation, Perth is in a unique position comparative to the rest of Australia,” Mr Clark said.

“Our property values were already at the lower end of the property cycle, and apartment prices currently represent excellent value for money.

“While the fallout of the pandemic might create value variances in other states, I believe it is unlikely in Perth.

“In light of the activity over the last few months, I would expect to see apartment prices on our projects hold as the market restabilises and returns to growth in 2021.” 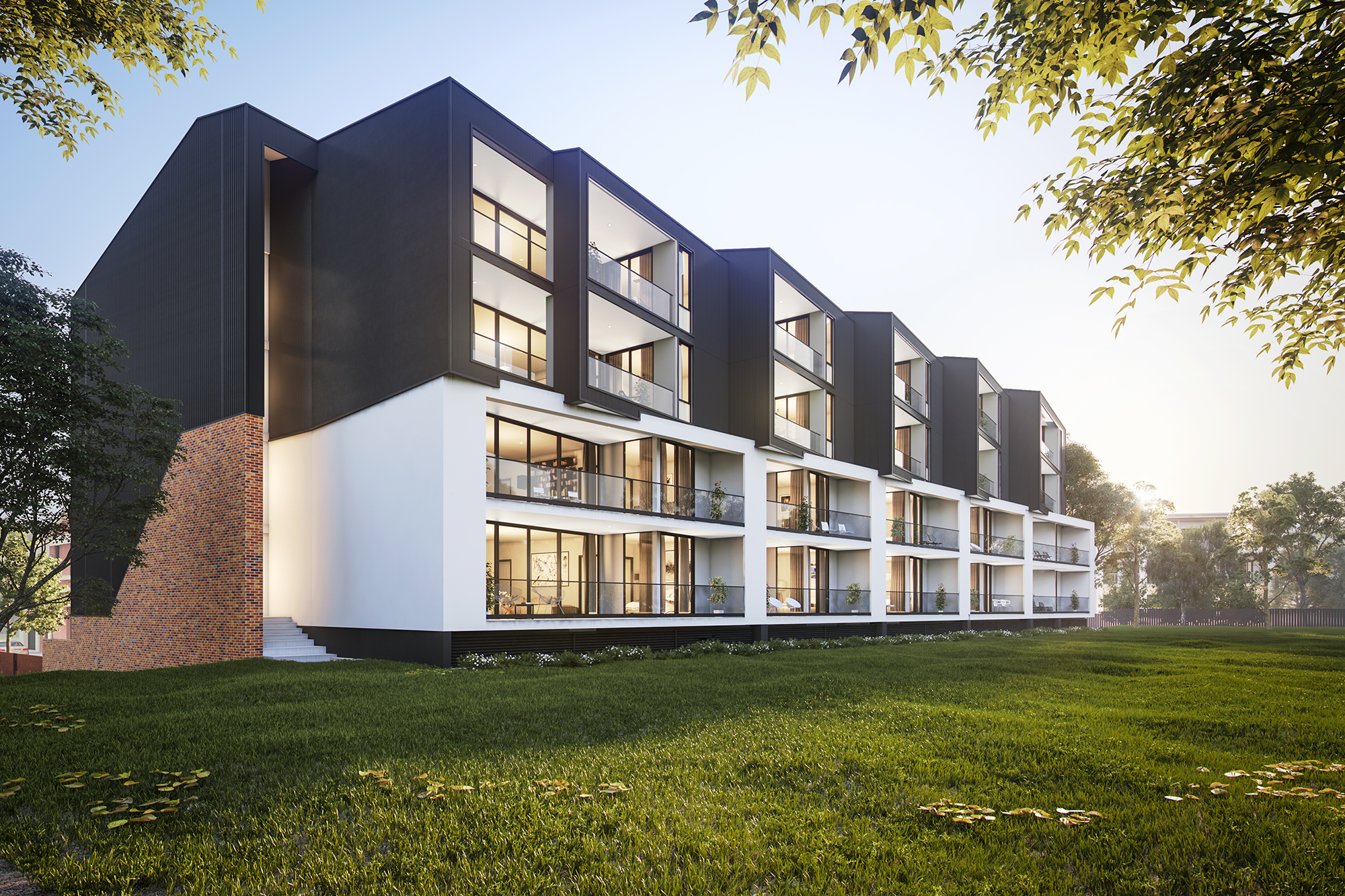 MGroup is progressing plans to start construction on its M/27 40-apartment development in Fremantle.

Apartment developer Paul Blackburne is also expecting prices to remain steady, and said COVID-19 had not yet affected sales, with most of his apartment stock already sold.

Blackburne’s Marina East development, located in Ascot Waters, finished construction in May with 80 per cent of apartments sold.

“The past 12 months have been our highest-selling year on record with $203 million in sales in just the first nine months,” Mr Blackburne told Business News.

“Now that things are opening up more and the major threat of the crisis is most likely over, people have started buying in larger volumes.

“Prices had gone up for four months in a row. The next year would have seen 3 to 5 per cent growth.”

Outlook Data compiled by real estate services firm JLL revealed that apartment sales in the inner city were down 3.9 per cent in the 12 months to the fourth quarter of 2019.

However, apartment sales activity was up 12.5 per cent in the fourth quarter on the preceding three months.

JLL manager of strategic research Ronak Bhimjiani said this had most likely been fuelled by the 75 per cent stamp duty rebate on off-the-plan purchases.

Additionally, Mr Bhimjiani said apartment values increased by 1.7 per cent in Perth between November 2019 and February 2020, a figure not seen since mid-2013 during the peak of the resources boom.

“The long-awaited recovery in Perth’s apartment market is likely to be delayed, as COVID-19 keeps conditions challenging in the short term,” he said.

“However, it is important to note that current economic and property market data does not yet fully capture the full impact of COVID-19.”

Any anticipated drop in demand could be partially offset by supply, with construction expected to cool off beyond 2020.

Mr Bhimjiani said there were about 380 apartments across a handful of smaller boutique developments likely to be completed in 2021.

Meanwhile, for larger developments previously set for 2021 completion, he said project timelines had been pushed out to 2022, with further economic uncertainty potentially limiting new starts.

“Many of these projects that are in the early stages of marketing or at the development approval stage could slip into later years or be abandoned if sufficient pre-sales are not achieved and economic conditions do not improve,” Mr Bhimjiani said.

“The impact on pricing will ultimately be dependent on the supply versus demand dynamics in the Perth apartment market.”

The ASX-listed property development company recently announced it had completed construction of its One Kennedy Maylands project, with sales of $23.5 million secured to date, representing 43 per cent of apartments.

Mr Pateman said there hadn’t been any immediate shift in apartment values, with all recent Finbar contracts at pre-COVID-19 pricing.

“The Perth market was already at one of its most affordable levels pre-COVID, in contrast perhaps to eastern states markets, which were experiencing far higher levels of growth,” Mr Pateman told Business News.

“WA has done it tough for near on five years and pre-COVID we were clearly entering a recovery phase, while eastern states markets have been boiling over for some time.

“Extending the stamp duty rebate beyond off-the-plan sales to projects under construction and new completed stock to encourage commencements will allow vital capital to be redirected to new job creating projects for thousands of Western Australians.”

Mr Pateman said this would help revive the WA economy as it moved into the recovery phase post COVID-19.

Mr Clark agreed and said the role of government was critical to maintaining buyer confidence, which could be achieved by additional stamp duty relief by way of rebate or discount.

“This is about keeping the market moving in the right direction and buyer incentives are proven and successful in this space,” he said.

“Government and industry alike have a significant role to play here.”