Calls for infrastructure body heat up

SPECIAL REPORT: The Economic Regulation Authority has dismissed calls from several industry bodies for the creation of an independent infrastructure advisory body, saying it is an added cost unlikely to contribute much. 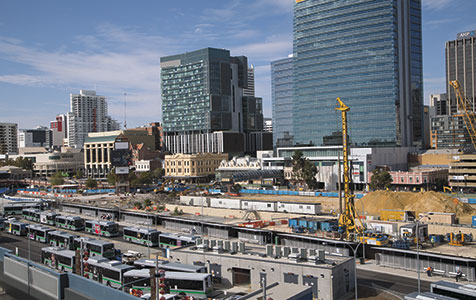 BIG: Perth City Link’s $249 million underground bus station is one of several projects under construction, which will reconnect the city centre with Northbridge. Photo: Attila Csaszar

The Economic Regulation Authority has dismissed calls from several industry bodies for the creation of an independent infrastructure advisory body, saying it is an added cost unlikely to contribute much.

Speaking after delivering the ERA’s draft micro-economic reform earlier this month, executive chairman Lyndon Rowe said there was more value in ensuring a disciplined process was in place to assess infrastructure projects.

“We think an Infrastructure WA is probably an additional cost that won’t necessarily add much to that process,” Mr Rowe told Business News.

The ERA said in its draft report the state could get better infrastructure outcomes by focusing on following good process and using the sources of advice already in place.

Mr Rowe said that while the objective of an independent body was to de-politicise decision making, even such a body would have representatives with vested interests.

“These are decisions that are being made on behalf of the community. The best people to make those decisions at the end of the day are politicians,” Mr Rowe said.

However, several industry groups, which support the creation of an independent entity, have maintained that such a body is the best way to provide advice to government on how to prioritise and make decisions around infrastructure, as well as publicise cost-benefit analyses.

While similar bodies exist in Canberra and other states, the nearest thing in WA is the Infrastructure Coordinating Committee.

Crucially, the ICC is made up solely of government agency representatives.

In its initial submission to the ERA, the Chamber of Commerce and Industry WA raised concerns about the effectiveness of the ICC.

Among its complaints were that the ICC lacked direct industry involvement, could be superseded by planning from other government entities and did not have a long-term infrastructure strategy.

Chief executive Deidre Willmott told Business News while the chamber was generally supportive of the draft reforms recommended by the ERA, it upheld that infrastructure projects should be prioritised in a transparent process that demonstrated which had the strongest economic return.

“The best way to determine that is to do an independent cost-benefit analysis on each investment in infrastructure,” Ms Willmott said.

“Though the Property Council supports the ERA’s recommendations regarding infrastructure, they do not go far enough. In order to achieve what the ERA recommends, it is necessary that we have an independent coordinating body,” Mr Lenzo said.

For many years the Property Council has said the current state infrastructure planning process is not clear, lacks accountability and has no publicly known method of prioritisation and investment allocation.

It recently commissioned a report, due in June, addressing these issues and looking specifically at how poorly planned and delayed infrastructure has constrained property development.

The Civil Contractors Federation WA has stood by its call for an independent state-based infrastructure agency.

Chief executive Jeff Miller said that while it was rare for an industry body to request another layer of government, in the case of infrastructure planning it was necessary.

Mr Miller said planning of individual projects was well thought out, but an overarching strategy was lacking.

“A lot of projects have been well coordinated. They are complex and we take our hat off to them, but what we’re saying is the state needs that on a larger scale,” Mr Miller said.

He said an independent body could mitigate against governments being overly influenced by four-year electoral cycles.

“Why should it come down to a grab bag of things that are promised in the lead up to a state election and then half the time don’t materialise,” Mr Miller said.

“The timeframe should be pushed out to be much longer than the current planning, which we think has one eye on the electoral cycle.”

The Chamber of Minerals and Energy WA, which recommended an arm’s length infrastructure body as well as a state infrastructure plan, said this represented the best way to ensure a future pipeline of projects.

The Master Builders Association of WA, which recommended the establishment of a state infrastructure council with industry representation and a dedicated minister, said this was the best way for government to achieve more and with greater speed.

Executive director Michael McLean said he believed the ERA had missed an opportunity, but the group was more focused on its main priority of reform of the state’s taxation system.

Labor infrastructure spokesman Ken Travers said his party was still examining the ERA draft report, but remained concerned that the current system did not allow for an informed debate.

“The big glaring problem in Western Australia is that projects appear to be chosen at a whim by the government,” Mr Travers said.

“WA Labor has significant concerns with the current government’s chaotic and dysfunctional approach to infrastructure planning.”

Mr Travers said a state infrastructure strategy could have stopped the Barnett government from prioritising and then dropping the Ellenbrook bus rapid transit, MAX light rail and the extension of the Joondalup line to Yanchep with little explanation.

“I think you need two things. You need the government agencies casting out 10 years and projecting what they actually need,” Mr Travers said.

“Then have a body ... with a degree of independence to go through and review those processes to make sure if there’s a business case, the benefits and cost analysis is verifiable,” Mr Travers said.

A spokesman for WA Treasurer Mike Nahan said the government would not necessarily consider every recommendation from the ERA’s final report.

“While there are recommendations that would not be considered by government, it is important to encourage debate on the issues, noting that the final report may be significantly different,” the spokesman said.

The state government is withholding announcements about infrastructure until the budget is released on May 8, but it has got involved in a national debate about recycling capital of major assets.

A spokesman said the minister liked the idea, which is yet to be fleshed out, but even if WA decided to privatise infrastructure assets, it might choose to reinvest those funds to pay off debt instead.

“It’s nice to know there’s a 15 per cent carrot out there, but it doesn’t mean that we’ve committed to anything,” the spokesman said.

“It will be our decision if and when we do sell assets whether we retire debt or whether we build new (infrastructure).”