Perth is projected to have seven of the nation’s top 10 most-congested roads by 2031, and despite public displeasure, toll roads could be part of the solution. 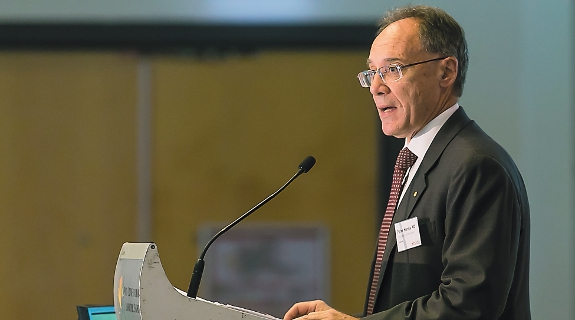 BUILD THE ROADS: Peter Harris says the public needs to be made aware of the cost of doing nothing on transport reform. Photo: Dale Watson

Perth is projected to have seven of the nation’s top 10 most-congested roads by 2031, and despite public displeasure, toll roads could be part of the solution.

Rising petrol prices, vehicle wear and tear, and the hours stuck in traffic on the daily commute are all costly realities of a motorist’s life.

However, the cost of any journey’s most expensive piece of infrastructure, the road itself, is only indirectly borne by the user.

That lack of a price signal is part of the reason for congestion, a major cause of poor planning and of poor public investment allocation, according to Productivity Commissioner Peter Harris.

Before reform can take place, clear communication of the problems inherent in the current system and the benefits of change would be key, Mr Harris told delegates at a recent Committee for Economic Development of Australia forum.

It was timely commentary, with the state parliament reviewing legislation to allow the commissioner of Main Roads WA to set tolls as part of the funding package for the Perth Freight Link.

Ambiguity in the wording has meant that the state government has had to hose down speculation that it might expand tolls to existing roads.

One example of how a broader system might work, however, comes from an ongoing test study in Oregon, Mr Harris said, where a small group of drivers are charged by kilometre travelled.

In that case, they are reimbursed for fuel tax.

Locally, he acknowledged that revenue could be used to dramatically reduce registration charges, which are fixed costs that disadvantage infrequent road users.

Labelling road pricing the last great bastion of infrastructure reform, Mr Harris noted that the recent Harper Review of competition policy had also picked it as a high priority.

RAC chief executive Terry Agnew said it was important that taxation for road usage was fully allocated to road funding.

He said about 34 cents of every dollar raised in Western Australia through the current fuel excise system was allocated to fund road infrastructure here.

A solution would be to ‘hypothecate’ road taxes directly into funding infrastructure, enshrining in legislation a provision that 100 per cent of the revenue would be spent on roads or transport.

Otherwise, by 2031, congestion would cost the state’s economy up to $16 billion, Mr Agnew said.

There are further options to reduce congestion, however.

Mr Agnew highlighted cycle paths as one, with a return sometimes in excess of three times cost.

Another top priority was the building of Perth Light Rail, he said.

In the meantime, the government has named Leighton Contractors as the preferred proponent for the first stage of the Perth Freight Link, the extension of Roe 8.

The plan for the second stage of the project remains unclear.

In combination, both stages were mooted to cut 9.5 minutes off a trip from the Kwinana Freeway to Fremantle, saving about $8.15 in freight costs per trip.

That saving on journey time and cost is what will enable the state government to levy the toll, with heavy road users still better off overall.

But a spokesman for the WA Road Transport Association, which acts for the trucking industry, said the organisation would not support a toll in the project’s current form.

“There is little efficiency gained from travelling a road that finishes at Stock Road,” the spokesman told Business News.

“The road network needs to be complete, all the way through to Fremantle before any toll is warranted.

“From Stock Road to the Roe 8 intersection, there would still be (as far as I can tell) 10 sets of lights to get into the port.”

He also said it was unacceptable that, in the bill’s current form, it would enable tolls for other prescribed roads, not just those connected to the link.