The drive into Cairns was a shock to the system, with lush vegetation and hilly terrain making for a pleasant surprise after a month of desert country. 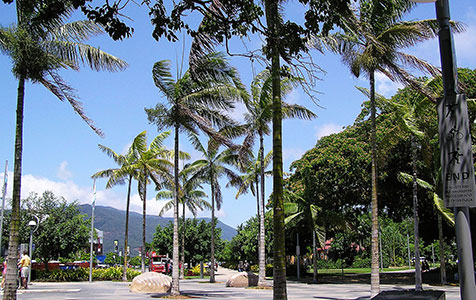 The drive into Cairns was a shock to the system, with lush vegetation and hilly terrain making for a pleasant surprise after a month of desert country.

After travelling through dry, dusty and flat countryside for the past month, arriving at Cairns was a sudden shock to the system – it was green. More than that, it was lush, there were hills, windy roads, dairy farms, verdant forests – things we hadn’t seen for a long time.

We arrived on Saturday afternoon, after a monotonous 500-kilometre drive from the Gulf country. This drive pushed my boredom levels off the dial, for the first time on the trip. Maybe it was the knowledge that Cairns was getting close that made the final stretch particularly tiresome.

The terrain started to change a little about 150km inland – a few trees, a little grass, etc. It changed dramatically as the altitude increased, and we suddenly found ourselves at Ravenshoe, which claims to be the highest town in Queensland at 930 metres. This was the start of the Atherton Tablelands, an area quite unlike anything in WA.

There was lush growth everywhere, with numerous dairy farms dotted around the steep hills. We drove through densely forested areas, into deep gullies, past the Misty Mountains and fog warning signs, and out the other side into sunshine.

Navigation was becoming more tricky, with lots of small towns, windy roads and multiple options for getting to Cairns. That was a major change after the past month, when we could look hundreds of kilometres ahead to the next big turn.

We stopped for lunch at Yungaburra, a small farming town that has turned into a cute touristy/ hippy town. It had lots of cafes, craft shops and cottages, and a huge second-hand bookshop where I bought Michael Lewis’s Wall Street expose The Big Short and an old paperback of Graham Greene’s, Brighton Rock.

Lunch was followed by a steep, winding 19km descent to the coastal plain – the kind of road where thoughts turn to fears of losing the brakes or running into a broken down vehicle. We later discovered this was the windiest, steepest road into Cairns.

Before long, we were caught up in the busy traffic around Cairns, and having to deal with traffic lights again. The city’s outskirts are a bit of a jumble, with new housing and commercial developments encroaching on cane farms.

After booking into a caravan park, we drove just a short distance to see a Business News colleague and her family We proudly brought out the blue salmon we had caught the previous morning in the Gulf and shared a very enjoyable barbecue dinner.

Beautiful scenery, shame about the weather

What do you do when a region that is renowned for sunshine, swimming and snorkelling is hit by a bout of miserable weather?

That is a question we, and thousands of our fellow travellers, had to ask ourselves after Far North Queensland was hit by persistent drizzle and wind.

We’ve just spent a week in Cairns, Port Douglas and the surrounding region in the middle of what is supposedly the dry season – and therefore the peak tourist season. Apart from last Saturday when we arrived, the weather told a different story.

On a good day, the sun was shining but it was still windy, making the sea choppy. On a bad day, there was persistent drizzle and periods of heavy rain. People from Melbourne joked that it was still warmer in Cairns than at their home, but that’s small consolation. The poor weather even resulted in the cancellation of some Great Barrier Reef snorkelling trips, which rank as the region’s number one drawcard.

Another drawcard is the nearby rainforests, but of course they attract even more rain. FNQ is a great case study in how steep mountains near the coast define rainfall patterns. It’s the kind of thing we learn about in school, but in Cairns they live it. While the sun might be shining on the coast, it can be pouring with rain just a few kilometres inland at the foot of the mountains. And yet if you drive 30 minutes over the mountains to places like Mt Molloy or Mareeba, you are suddenly in a temperate climate with terrain and vegetation like Perth. The welcome sign at Mareeba boasts that it has 300 days of sunshine per year.

The upside for the region is that the rainforests are stunning. I often looked in wonder at what mother nature has produced – giant trees, beautiful ferns, so many shapes and sizes. Whether you go to Kuranda, near Cairns, or Mossman Gorge about one hour north, or Cape Tribulation in the Daintree Rainforest, the scenery and the bush walks are outstanding. They are also very user friendly, with lots of elevated walkways and boardwalks.

The drive north is an event in itself, and shows the variety up here. Central Cairns was mostly what I expected. It has lots of hotels and apartments, countless cafes and shops and markets, hordes of tourists and backpackers, dozens of small booking agencies trying to win our business, and some very fancy boats in the marina.

One thing Cairns’ does not have is an ocean beach, unless you count the artificial beach on the Esplanade, which has white sand they must have imported from Cottesloe. But 15-30 minutes north is a series of ocean beaches, like Yorkeys Knob – no joke – and the beautiful Palm Cove, which would have been a lot more beautiful if it wasn’t overcast and windy. Each of these is like a holiday town in its own right.

Later we took a drive along the stunning highway that hugs the coast all the way to Port Douglas. Port Douglas is spread over a large area so it feels more like a beach getaway than a busy resort. It also has plenty of cafes and shops and markets.

It’s close to Mossman, so travellers who venture on also get to see a real farming town, surrounded by cane fields.

After that comes Daintree Village, a charming little town that calls itself ‘The Village in the Rainforest’, which, surprise surprise, is the very same tagline employed by Kuranda. It’s a good base for croc tours along the Daintree River, which has both saltwater and freshwater crocs.

Travellers can take a ferry across the Daintree River, to drive up to Cape Tribulation and beyond. I was surprised by the large number of people making the crossing. I was even more surprised to discover that about 1,000 people actually live north of the Daintree River, in an area promoted as untouched wilderness.

I certainly hadn’t expected to find a school, a hotel, ice-cream factories, a petrol station, a liquor store and numerous other businesses and houses in the Daintree. On close inspection, none of the businesses is in the national park – they are all on land excised from the national park – but that’s just a technicality.

The large residential population, and the large number of travellers, inevitably creates some issues, such as the power supply. Mains power does not extend north of the Daintree River, which means the locals need to employ other solutions. I discovered this on our first night camping in the Daintree, in a gorgeous setting surrounded by the tall forest. As I lay down to sleep, the only thing I could hear was … not water running along a stream, not even rain dropping on the tent, but the camp site generator, which runs 24-7. Thankfully this was a one-off. We found other campsites that were better organised.

During our week in and around Cairns, I was curiously entertained by the inability of many people to adapt to the changing weather. At Mossman Gorge, for instance, I saw many groups heading off for the gorge walk in t-shirts, shorts and thongs, pretending it was a sunny day. They struggled when they got to the dirt path, which had turned to mud. And they got drenched when there was a torrential downpour.

Not surprisingly, many people turned to ‘retail therapy’ to deal with the poor weather. I spoke to one cafe owner who said business is always up when it rains. He was enjoying a very brisk trade.