More than two decades ago, Barry Cable cycled from Perth to the Melbourne Cricket Ground to toss the coin for the 1993 AFL Grand Final. 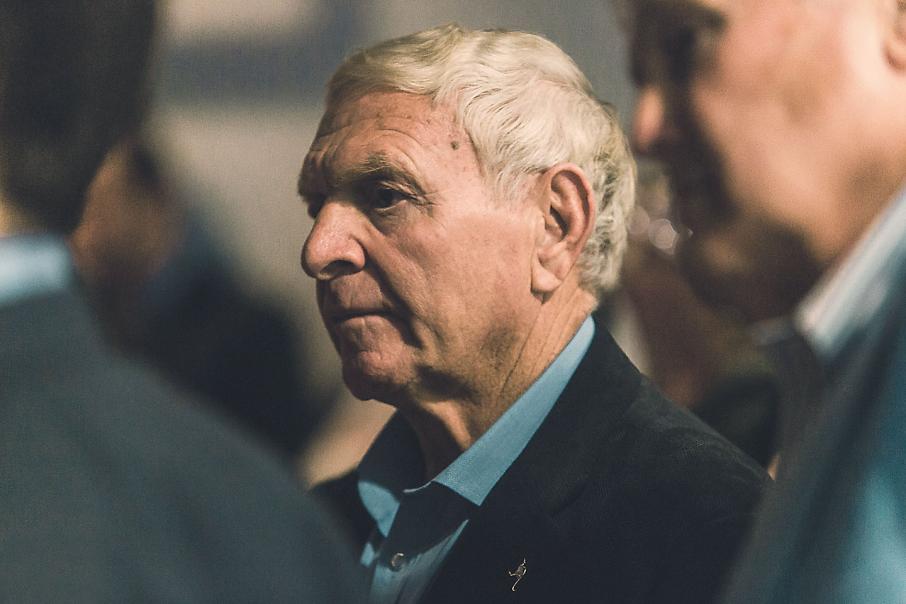 PEDAL POWER: Football legend Barry Cable finished the charity ride on June 10 and will be a central figure in a new film. Photo: Zac Gordon

More than two decades ago, Barry Cable cycled from Perth to the Melbourne Cricket Ground to toss the coin for the 1993 AFL Grand Final.

This year, at 72 years of age, the Australian rules football legend has lost nothing of his staying power, recently completing a 1,000-kilometre bike ride to raise awareness and support for the McCusker Alzheimer’s Research Foundation.

The Barry Cable Ride for Memories was sponsored by Automotive Holdings Group and marked the launch of a variety of ongoing fundraising initiatives the foundation hopes will add to the $120,000 raised during the ride.

Joined by friend Josh Catalano, Mr Cable rode across the state’s South West from Esperance to Perth, visiting communities, including his home town of Narrogin, on the way.

Mr Cable played a total of more than 400 games in the Western Australian and Victorian football leagues, winning numerous best and fairest medals. He later made a significant contribution as a coach.

Now, his footy achievements and those of 23 other great Nyoongar players will be celebrated in a feature length sports documentary ‘A Team of Champions’.

Beyond West, a media company specialising in low-budget documentaries, will lead the project.

Beyond West executive producer and manager Harry Bardwell said the documentary would feature some of the best football ever played, while paying tribute to some of WA’s talent.

“From that relatively small number of people it’s extraordinary that there are that many great players … it’s thought to be one of the highest representations at a national level of any football code in the world.”

The documentary will piece together snippets of the 24 players’ football careers, as well as their life journeys.

The earliest will be Jimmy Melbourne, the first ever Nyoongar footballer to play in a premiership side, dating back to his involvement with West Perth in 1900.

Other well-known Nyoongar legends featured will include players from the 1950s onwards, including Polly Farmer, the Krakouer brothers, Peter Matera and Buddy Franklin.

Mr Bardwell said the project was in active discussion with a number of companies and government agencies to gain substantial financial support and development assistance.

A donation to the project can be made by visiting the FTI Philanthropic website.

There are 21 Nyoongar footballers playing in the AFL.

In other community and arts news...

The State Library of Western Australia and Curtin University have teamed up to deliver a project that preserves Perth’s visual history via a virtual tour online.

The project shows how certain parts of Perth and Fremantle have changed over time by comparing historical photos preserved at the library with new photos, taken from the same vantage point.

Other parts of the tour contain images dating as far back as 1860.

The library hopes the project will encourage people to donate similar old photos to add to the visual collection of Perth’s history.

The ‘Panoramas – Perth and Fremantle’ website launched on June 15.

Vision in the outback

A mobile eye clinic established by 40under40 winner and eye specialist Angus Turner has received $2 million in funding from the state government.

It’s the second donation of that size received by Lions Outback Vision from the WA Department of Health, alongside a Lotterywest commitment of $1.9 million.

The mobile van has been making its way across Western Australia for the past three months, visiting 12 centres and delivering state-of-the-art eye care to more than 650 regional patients.

The 20-metre van has the capacity to treat up to 200 people per week and plans to travel 24,000 kilometres to regional sites each year.

Health Minister John Day believes the initiative has the potential to close the estimated $33 million eye health gap between regional and metropolitan WA.