The resource sector is forecast to take on 18,000 workers over the next 12 months as it seeks to make up for maintenance and other work postponed this year. 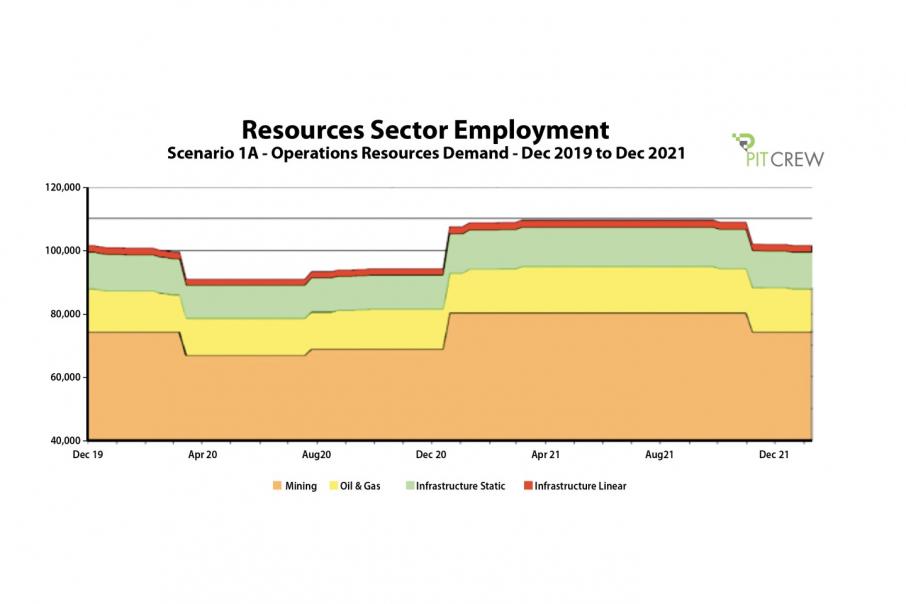 Pitcrew anticipates that during 2021, the sector will endeavour to make up for the work that has been deferred.

The resource sector is forecast to take on 18,000 workers over the next 12 months as it seeks to make up for maintenance and other work postponed this year.

Workforce modelling commissioned by the Chamber of Minerals and Energy of Western Australia shows the sector lost 10,700 jobs early this year, equivalent to 10.5 per cent of total employment.

That was mainly a result of mining companies and oil and gas producers in WA deferring maintenance shutdowns and other non-essential work so they could minimise on-site staff numbers.

The modelling, undertaken by specialist consulting firm Pitcrew, assumes an extended deferral of maintenance work and capital spending through 2020 while WA’s hard state border is maintained.

Pitcrew Consulting anticipates that, during 2021, the sector will endeavour to make up for the work that has been deferred.

As well as re-engaging 10,000-plus contractors, equivalent to the numbers laid off early this year, the sector is expected to add between 6,800 and 8,050 further workers.

That’s an increase of up to 7.9 per cent over Pitcrew’s baseline of 101,400 jobs in the sector at the end of 2019, before COVID restrictions took effect.

(The baseline is based on official statistical classifications and contrasts with state government data showing about 120,000 jobs in the resources sector; the latter includes processing and exploration jobs.)

The Pitcrew projections show the sector will sustain higher employment for most of 2021, before dropping back to around the baseline level.

They foreshadow a considerable increase in competition for key skills, such as traditional trades and experienced technicians, front line supervisors and maintainers, and safety and medical support services.

He also noted that about 5,000 fly-in, fly-out workers who had been living interstate had relocated to WA.

“In response to COVID-19, companies moved early and decisively to relocate thousands of their employees and contractors in critical roles to WA, with companies offering incentive packages to make the move permanent,” Mr Everingham said.

“The skills migration to the west brought on by COVID-19 has been nothing short of phenomenal.

“The vast majority of WA’s interstate FIFO workforce of around 5,000 has made the move west, some individually, others with their families at very short notice prior to the state border closure in April.

“Many of our members have also been recruiting for hundreds of skilled roles from within WA over the past few months. These roles are a mixture of regional and Perth based, including both residential and fly-in, fly-out.”

Mr Everingham estimated that only about 1 to 2 per cent of the workforce still needed to be sourced from outside WA under the current COVID-19 operating environment.

“Exceptional reasons still exist for sourcing skills outside of WA, which cannot be simply substituted locally,” he said.

“These roles are often safety-critical and highly technical, and require unique skills or years of experience, often with a particular type of machinery.”

Mr Everingham said the WA resources sector remained committed to skills development for current and future workers in the industry.

“For example, Rio Tinto has committed funding toward the upskilling of out of work apprentices across various industries by covering their fees for a course in automation," he said.

“This will allow for the enrolment of up to 200 apprentices who have had their apprenticeships suspended or cancelled due to COVID-19.

“BHP recently welcomed 125 WA apprentices and trainees into its ranks as part of a new national training program that will help to bolster Australia’s skills base and create new career pathways into the mining sector.

“In line with its commitment to providing training and employment opportunities for Aboriginal people, Fortescue has continued to run its Vocational Training and Employment Centre program through the COVID-19 period, resulting in 21 Aboriginal trainees securing full-time employment, joining 900 former graduates.”