CFMEU and MUA in merger talks

Two of Australia’s most powerful, and militant, trade unions have flagged a potential merger to create an industrial monolith spanning construction, mining and the wharfside. 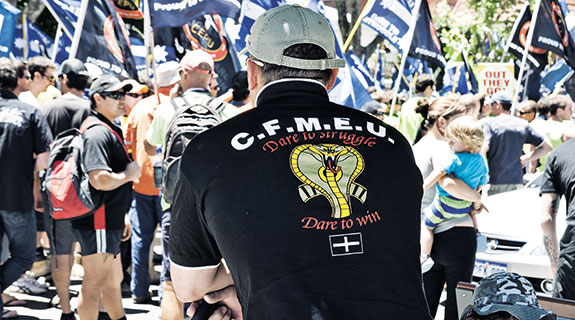 The merger would create the nation's most powerful union.

Two of Australia’s most powerful, and militant, trade unions have flagged a potential merger to create an industrial monolith spanning construction, mining and the wharfside.

High-ranking Construction, Forestry, Mining and Energy Union officials met with bosses from the Maritime Union of Australia in Sydney today to float a deal to be taken to the MUA national conference in February.

The combined union would be the nation’s most powerful, MUA national secretary Paddy Crulim said.

“We have been presented with a monumental opportunity to represent working men and women in the Australian workplace without losing the long and proud history of our union,” Mr Crumlin said.

“The MUA is no stranger to mergers and since the Waterside Workers’ Federation and the Seaman’s Union of Australia amalgamated in 1993 the MUA today is here to stay and can only grow in strength in this new union.

“This is a huge decision that hasn’t been taken lightly, but discussions to merge with the like-minded CFMEU will help us fight the ever-pervasive anti-worker and anti-union attacks on workers and their entitlements and job security.”

Both bodies have come under sharp criticism in recent years for their strong bargaining stances, with CFMEU members working on Chevron’s Gorgon project voting for industrial action earlier this year.

It was intended to improve rostering for workers on the project and had the support of Australian Metal Workers Union members, although it was avoided after a 5 per cent pay rise was granted.

But it has led to calls for changes to allow industrial agreements to be extended to cover the life of greenfields projects.

CFMEU national secretary Michael O’Connor said it would be an opportunity to bring strenght to the national and international union movement.

“The MUA offers us a chance to strengthen our politics within the CFMEU, because the struggle isn’t just about increasing wages, or creating a safe work site, there is also a bigger and important political struggle," he said.

“We’re very conscious of the MUA’s identity and we want to make it clear that this is a merger of equals.

“This move will be hugely beneficial to not just the members of the MUA and CFMEU but will lead the way for all working men and women.”