Does stable remuneration at the top of the field indicate the depth of our economic trough has been reached? 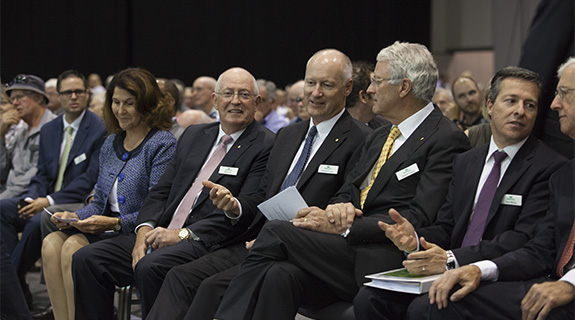 Does stable remuneration at the top of the field indicate the depth of our economic trough has been reached?

IT may be a stretch to suggest that a near flatline in the number of CEOs earning $1 million represents a bottoming of the economic slump in Western Australia, but this publication will try its best to put up a convincing argument.

The 2014-15 data, taken from more than 700 listed companies that Business News considers to be Western Australian, shows around 73 executives had millionaire remuneration for the financial year.

That drop from 74 in the previous corresponding period shows the pace of change has slowed considerably.

Compared with 90 executives in 2012-13 above the $1 million mark, the latest data offer hope that, despite the continuing commodity squeeze, there is some stability in the market. Let’s hope so.

The people on this list also reflect a diversification of our economy beyond resources. While mining, and oil and gas still represent a big proportion of the industries from which these executives come, there are many others – including an increasing number of technology players.

This is a good thing. We need new businesses to take up the slack as resources companies cut staff and salaries. High-level CEO remuneration is indicative of the success of that change.

Naturally, though, there will be a skew towards company founders in smaller-capped vehicles, just as we see in minerals exploration.

This means there is often a low correlation between CEO income and the size of a company, or its ability to produce regular and growing earnings. This is not that surprising, as remuneration often reflects the relationship between risk and reward; with smaller company leaders often subject to more volatile earnings than their peers at big businesses with more stable operations.

Of course, there are always exceptions to every rule.

This year, our CEO salary review has noted a widening of pay freezes and other mechanisms to rein-in costs in order to survive what is likely to be protracted period of difficulty.

Small to mid-cap companies have done more in the form of pay cuts – both to existing executives and in the case of bringing in new talent.

While this might appear to be the market in action, the lag in this response to economic conditions suggests that CEOs and the boards that appoint them are less aggressive than general business demands for labour flexibility would suggest.

It ought to be easier and, therefore, quicker to cut executive remuneration than general employee wages, due to the nation’s rather rigid industrial relations rules. In reality, it seems business leaders are just as recalcitrant as workers when it comes to taking an income hit.

When it comes to executive remuneration, the Business News BNiQ search engine has been updated to display the earnings of more than 2,000 executives and directors.

The database shows total remuneration as well as a breakdown of that figure into base salary, bonuses, shares/options, superannuation and other payments.

Remuneration is one of the most popular aspects of the data we publish. It is available as a comprehensive searchable table https://www.businessnews.com.au/executive-salaries, as well as being individually listed on related company and people pages on our website.

Executive remuneration data is highly sought after and Business News has such a large amount due to the public nature of ASX-listed accounts and the high number of public companies based in the state.

Journalist Mark Beyer takes that data and conducts a thorough analysis based on years of experience with this feature and many well-researched updates during the year, as trends become noticeable to our team.

Our salary review was first undertaken in 2004, when a total of 22 business executives working in Perth or working for Perth-based public companies earned total income of more than $1 million.

It is notable eight of those 2003-04 executives worked for Wesfarmers. In 2014-15, nine executives are paid more than $1 million, eight of whom have earned more than $2 million and the ninth very close to it.