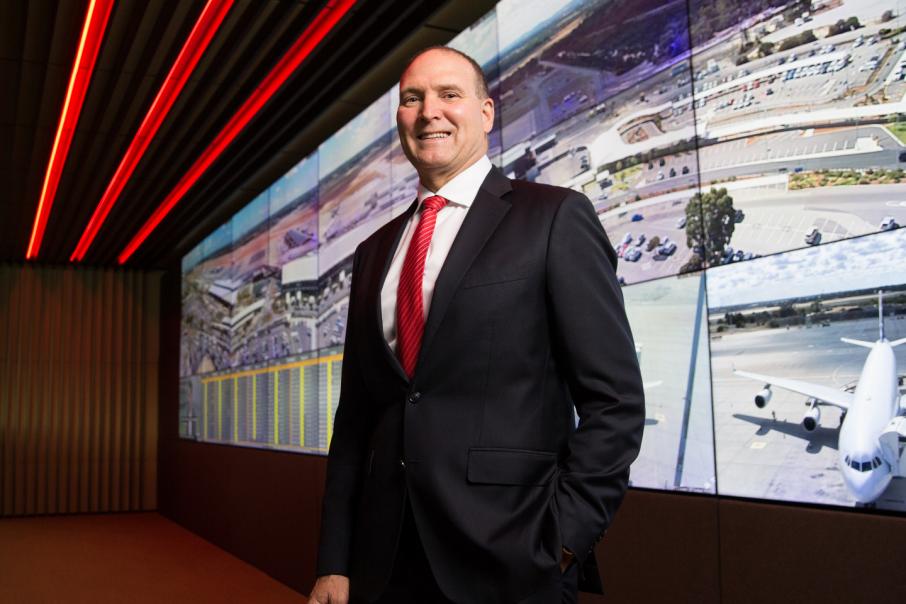 Nev Power sees synergies in his past role as CEO of mining player Fortescue Metals Group and his new role as chair of Perth Airport that may not necessarily be obvious to the distant observer.

“Fortescue was very much about a build-out of infrastructure and, of course, at Perth Airport we’ve completed about $1 billion of development over the last four or five years,” he said.

“Looking forward, there’s another $2.5 billion to be spent over the coming 10 years, so there is a big infrastructure part to the Perth Airport future.

“In addition to that, being a big fly-in, fly-out operation at Fortescue, we worked very closely with Perth Airport and the airlines to make sure that we had the efficiency and the right facilities here at Perth Airport to support that operation.

“I guess there’s a significant overlap from that perspective as well.

“Certainly the retail and the ground transport operations here at Perth Airport are quite different and I’m looking forward to learning about those, but there are a lot of similarities also in the fact that it’s about people, it’s about making sure that our customers, our passengers who come through Perth Airport, have a great experience and enjoy their travel.

“And also that we’re serving and servicing the needs of the broader state in providing that gateway and that hub role, so that we have an efficient and productive airport that can keep track and keep pace with the expansion as the state grows.”

As the leader of a global business (Fortescue), Mr Power did more than his fair share of air travel, something he believes helped shape his views on the airport as a business.

“I have spent a lot of my corporate career flying internationally and domestically, air travel is so critical in business,” he said.

“So I’ve had the opportunity to visit a lot of airports, sit on a lot of planes over that period of time and observe some very good experiences and some not so good ones.

“I would say the key factor for us at Perth Airport is to make sure that we keep ahead of that capacity increase.

“The biggest issues that I’ve seen in air travel, in airports particularly in some parts of the US where they’re overcrowded, the facilities haven’t been developed in line with the expectations of growth and the development of passenger numbers through there, so importantly, we need to have a long-term plan.

“We need to make sure that we’re developing the infrastructure, the terminal facilities, the car parking, the road systems, the rail network so we’re able to cope with that increase in the capacity and passenger numbers.

Another, more unlikely, synergy between Mr Power and his new role is the fact that he is highly qualified pilot, with a commercial-level licence.

“Growing up on a cattle station, flying is an important part of that, firstly the little Cessna, to spot cattle and to check waters and those sorts of things, and then we moved into helicopters to use for helicopter mustering, “ Mr Power said.

“So I developed a passion back then and had my pilot’s licence fairly early on in that process.

“Today I’m a commercial pilot, both fixed wing and helicopters.

“I love flying, whenever I get a chance to do it.

“I don’t do it anywhere near often enough for me, but it’s fantastic and I’ve had the experience of a lot of airports around Australia, including Perth, from the perspective of both the fixed wing and the helicopter pilot.”

“I understand the aviation industry very well, which is obviously a key part for the airport,” he said.

“I also understand the airport from an international and domestic travel perspective, and also from an infrastructure and construction perspective.

“So I think the flying qualifications just add to that understanding and knowledge of being an airport user.”

Mr Power joins the airport at an interesting time. Having invested heavily to deal with the boom-time traffic, it is now poised for an even more significant level of infrastructure growth over the next decade or more.

The new Perth Airport chair believes the facility is integral to the state’s success, and must focus on being the key transport hub for the western side of the country.

“I think Perth Airport can play a critical role in making sure our infrastructure develops to provide that efficient capacity for Perth and Western Australia to have a hub airport here that can deal with the passenger numbers, that can deal with the size of aircraft and provide passengers with a very efficient service, whether it’s the ground transport, the terminals and also the runway infrastructure,” Mr Power said.

“To support that, to develop new direct flights into Perth, particularly from Asia (and) to make sure we’re providing those opportunities for people, not only for business but also for tourism.

“The second big role I think we play is to make sure we’re part of the stakeholder engagement around the state – with government, with tourism operators, with like authorities in different regions, to make sure that we’re linked in and reflecting the needs of those areas.”

“Let’s take Margaret River, for example; we want to understand what the needs of those businesses in Margaret River are, so that we can provide that gateway to them for tourism and perhaps even exporting product at times, so I think there’s an opportunity for WA to promote itself more as a single entity.”

Mr Power reiterates that an important piece of the puzzle is to maintain capacity.

That may require significant capital expenditure ahead of demand in terms of airport infrastructure, such as adding a new runway.

“Because we need to take a long-term view and know that we’re building infrastructure here for decades into the future, and that everything we do is consistent with developing that capacity and providing the flexibility as we go forward.”

The first direct flights from Australia to London recently departed Perth Airport, allowing it to be something of a hub rather than just an end destination.

However, Mr Power acknowledges that is a limited opportunity, as technology will allow planes to fly further in the future, connecting other Australian cities and bypassing Perth yet again.

“Inevitably air travel will get to that point where those direct flights are possible,” he said.

“So we don’t want to be a fuel stop on the way to somewhere.

“We need to make sure we’re promoting WA and Perth as a destination in itself.

“We have some of the most fantastic wines in the world, developed here in WA.

“We have some of the most beautiful landscapes and countryside and some very wonderful experiences here in this state, and I think it’s relatively untapped and underdeveloped and there’s a lot of opportunity for us to bring a lot more people to WA as part of their key destination within Australia.

“The other thing I’d say is, we have fantastic educational facilities here and I think a lot of other cities have found that tourism follows education, because if your kids are going to a city to be educated, then mum and dad and the extended family are more likely to visit and spend time in that area and be tourists in that area, so we need to develop some of those.

“Likewise with health tourism; we have some wonderful health facilities and opportunities for people to come here and to do that.

“So I think our challenge as a state is to promote WA as a destination.

“For the moment, being a fuel stop can have some advantages as well. It’s providing some really good utility for Perth people who want to go directly to London, so particularly for business travel, that’s fantastic.

“Lets use that as the start of developing Perth into a destination in itself.”