Last night's Vinnies' CEO Sleepout saw 107 chief executives sleeping rough in the name of charity, and none did it tougher than Mermaid Marine boss Jeff Weber. 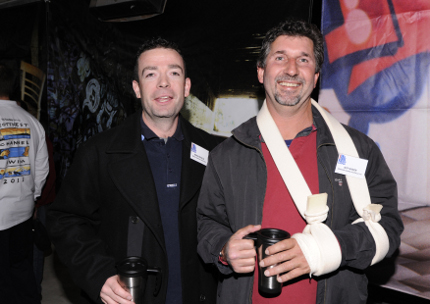 Last night's Vinnies' CEO Sleepout saw 107 chief executives sleeping rough in the name of charity, and none did it tougher than Mermaid Marine boss Jeff Weber.

Mr Weber was in Karratha on Wednesday and worried about getting a flight back to Perth, so he hired a car and drove 16 hours to be at the Sleepout.

And to make it really special, he did the long-distance drive with a broken arm, courtesy of an earlier cycling accident.

He told WA Business News that he didn't want to let down all of the people who had sponsored him in the charity sleep-out, and felt compelled to drive back to ensure he didn't miss out.

The WA turnout this year was a step-up from the 99 CEOs who slept out in last year's inaugural event, and the St Vincent de Paul Society is keen to see even more participate next year.

Even more notable was the increase in the amount raised. As of last night, the total stood at $579,000 and late sponsorships are still being accepted.

Other participants included the Governor designate, Malcolm McCusker and his wife Tonya.

Notably, four other states had more participants, yet WA raised the second highest amount of money.

Only NSW, with 256 participants raising $1.3 million, did better.

The WA tally was helped by Fortescue Metals Group chief Andrew Forrest, who slept under the stars for the second year running.

St Vinnies WA chief executive John Bouffler told the participants last night that Mr Forrest had contributed $2,000 to every other CEO in the Sleepout - a total of $212,000.

The participants had to endure conditions similar to those facing the homeless.

They were given cardboard for a mattress, had to sleep outdoors on concrete, and dinner consisted of soup and a bread roll.

Before bedding down for the night, they heard first-hand stories from homeless people and were entertained by the Starlight Hotel Choir, which is based at the the St Pat's Community Support Centre in Fremantle.

Mr Bouffler said there are 13,500 homeless people in WA currently, with one quarter under the age of 18.

In WA, Vinnies operates 33 accommodation sites that support individuals who are homeless or at risk of homelessness.