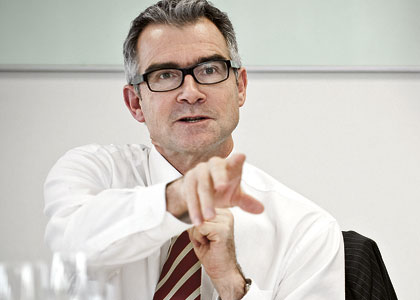 FUTURE HELP: James Pearson says the CCI is trying to help the state develop a blueprint that will help sustain the economy. Photo: Grant Currall

WESTERN Australia’s peak business lobby group, the Chamber of Commerce and Industry WA, has started beating the drum early on the state budget, highlighting time-worn issues such as payroll tax it says must be addressed.

Many of the nine priorities submitted by CCI to the state government’s budget process are familiar territory, as the business association seeks to remind a conservative government about past promises.

Apart from a cut in payroll tax by 0.5 of a percentage point to 5 per cent and an increase in the exemption threshold, CCI has sought to hold the government to account regarding recommendations made in reports following reviews into training, environmental approval process and state spending.

The lobby group also wants to see a continuation of efforts to make the pricing of electricity fully reflect the cost of its production.

CCI wants some tweaks to industrial relations law to reduce the cost of public holidays and ensure consistency when it comes to the right-of-entry provisions for unions.

But there are some big-picture issues the CCI wants addressed in the budget.

It wants to see a long-term strategic direction, which brings together infrastructure and resources, such as water and energy. In addition, it is seeking development of the proposed Strategic Energy Initiative to plan for a secure, competitive and reliable domestic energy sector; a state preventative health plan administered by the Department of Premier and Cabinet; and more appropriate local government boundaries.

CCI has also outlined its views on responsible fiscal management by the state. It wants to see spending continued to be reflective of the state’s growth and notes that a 5.2 per cent increase in 2010-11 was the lowest, albeit with a significant amount of deferred spending decisions.

However, the business organisation also belies the state’s debt levels are manageable and that it can manage substantial spending on appropriate infrastructure.

CCI CEO James Pearson said his organisation was simply trying to help the state develop a blueprint that will help sustain the economy during what is expected to be a forthcoming period of strong growth.

“What we are doing here is identifying for the government what we believe would make the biggest difference particularly for small business in WA in the next budget,” Mr Pearson told WA Business News.

“If the government is about getting bang for the taxpayer buck in the last budget before the election, these are the areas where we think it could make the biggest difference.

Mr Pearson said business frustration was most often directed towards local government, and CCI believed that industry would benefit from improving efficiencies created by the size of councils.

He said its argument on local government and proposals for health were simply newer suggestions on issues that had been of concern to CCI for some time.

On the health front, Mr Pearson said that, as taxpayers, it was in the interest of businesses to see health spending on prevention, which was 16 times more efficient than the outlay on cures.

Furthermore, business would benefit from a healthier workforce with employees that would be able to have longer careers.