Neighbourhood shopping centres and supermarkets are drawing significant investor interest, with more than $140 million worth of transactions occurring in 2019. 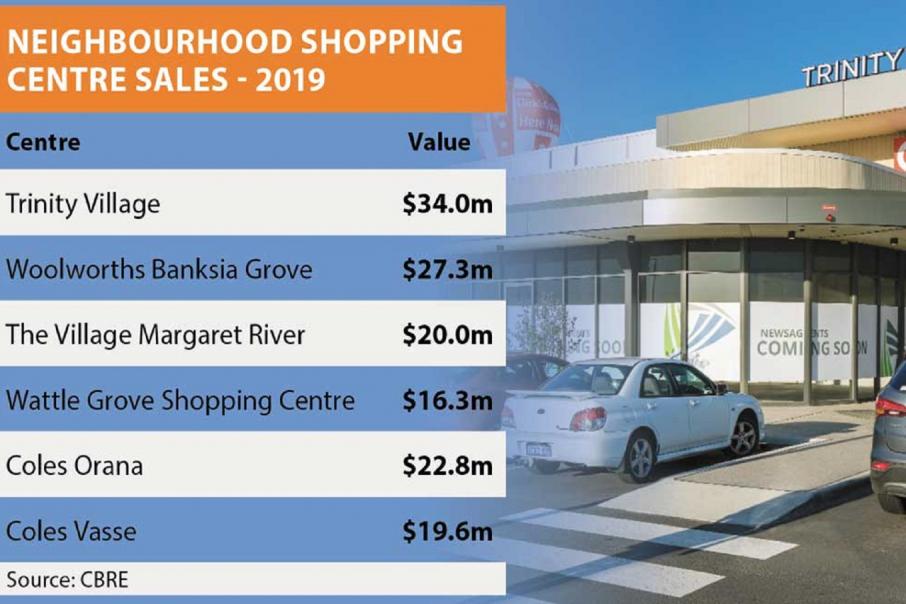 Neighbourhood shopping centres and supermarkets are drawing significant investor interest, with more than $140 million worth of transactions occurring in 2019.

Commercial agency CBRE has been most active among the major agencies, having been involved in six transactions each worth more than $15 million.

The latest deal was the sale of Trinity Village Shopping Centre in Alkimos, which was sold for $34 million.

The transaction activity builds on a standout 2018 for neighbourhood shopping centre sales, with Colliers International data showing 11 centres changed hands for a collective value of $284 million.

“The composition of neighbourhood centres, where more than 50 per cent of the net lettable area is occupied by a national supermarket tenant, offers a lower-risk profile for investors who are acquiring an asset with a long lease to a stable tenant,” Mr Tana told Business News.

“The 2018 sale of Flinders Square in Yokine is a good case study,” he said.

“The Coles-anchored centre is five kilometres from Perth’s CBD and its underlying land value contributed significantly to investor interest.

“Colliers International received a huge level of interest during the sales campaign and it sold for $39.5 million, which was 21 per cent above book value on a yield of 6.1 per cent.”

Mr Tana said he anticipated more transactions in coming months, with the Western Australian market being closely watched by offshore funds, high-net worth buyers and syndicates.

“Offshore buyers see WA as a safe place to invest and their acquisitions demonstrate confidence in the long-term fundamentals of the market and a commitment to having a presence in WA’s retail industry,” he said.