CBH Group is planning to launch a full review of its cooperative structure after formally rejecting a proposal from Australian Grains Champion to corporatise and list the business on the ASX. 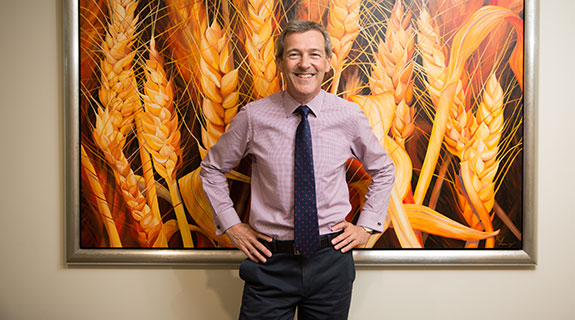 CBH Group is planning to launch a full review of its cooperative structure after formally rejecting a proposal from Australian Grains Champion (AGC) to corporatise and list the business on the ASX.

AGC director Brad Jones responded by saying his group would continue to work with Western Australian grain growers to evaluate options, in a process likely to parallel CBH’s own review.

Mr Jones said he was not the least bit surprised by CBH’s decision.

"At no stage has the CBH board sought to engage in a discussion about the merits of the proposal and so this was always going to be a disappointing but entirely predictable outcome,” he said.

CBH chief executive Andrew Crane said his group had received several inquiries from other parties, which highlighted the opportunities before Australia’s largest cooperative.

“The big issue is structure and how growers get returns.”

Mr Crane said the review would focus on three issues – governance and control, how to deliver value and the group’s strategy.

“Once you answer those three questions, that will lead you naturally to a structure,” he said.

Asked whether CBH was likely to move away from its current model of a non-distributing cooperative, Mr Crane said it was a high bar to pass, as growers benefited from lower charges and rebates.

“If there is a better model, we will work on that,” he said.

Chairman Wally Newman said the board would go back to growers with three or four combinations by September 30.

"We are prepared to look at all the structures from full corporatisation through to the non-trading (non-distributing) cooperative," he said.

The AGC proposal included cash payments of up to $1 billion and a distribution of shares to growers, with east coast grain handler and competitor GrainCorp expected to emerge as a significant minority shareholder in the listed business.

Explaining CBH’s rejection of the AGC proposal, Mr Newman said it lacked transparency, offered no long-term value to WA growers, and would deliver a strategic blocking stake to GrainCorp.

“This unsolicited bid would see Western Australian grain growers lose control of CBH’s strategic supply chain and GrainCorp acquire a strategic stake in CBH at a discount rather than a premium,” he said.

“We will not enter into an arrangement that does not recognise the investment of generations of Western Australian farmers.”

CBH said today its assets had a replacement insurance value of more than $5 billion, well above the total assets of $2.2 billion listed in its latest annual report.

“The AGC proposal would result in significant cash leakage from the CBH group, in turn this would result in less funds being available for ongoing network investment,” he said.

“The GrainCorp-backed proposal offers no long-term value, no guarantees, and no real future growth for WA grain growers.”

CBH was advised by Deutsche Bank and King & Wood Mallesons.

Despite rejecting the AGC proposal, which meant it would not be put direct to growers, Mr Newman said it was clear WA growers wanted the opportunity to consider how best to structure CBH for the future.

“In considering the available options on terms most favourable to our growers, our priority will be to retain the competitive advantage of our modern network,” he said.

“We will take the time to properly consult about the options and report back on that consultation by 30 September 2016.

“We are committed to giving growers the final say on the future of CBH.”

Mr Jones said growers were very disappointed the CBH board was blocking them from seeing a balanced assessment and full details of the proposal.

"At grower meetings in the past few weeks, the overwhelming majority of growers have confirmed they want to see the proposal,” he said.

This was disputed by Mr Crane, who said CBH regularly surveyed growers.

CBH completed a formal review of its cooperative structure in 2011, and that confirmed grower support for the current arrangements.