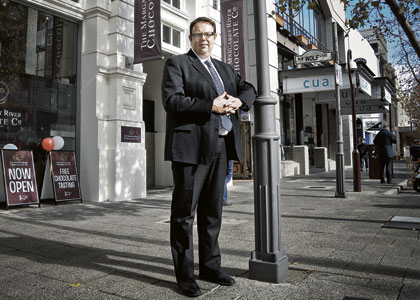 PERTH CBD retail space will expand dramatically this year, with new developments at Raine Square and Brookfield Place while city retailers worry about the deregulation of Sunday trading hours and the threat of online shopping.

According to a market report released by Knight Frank, 24,000 square metres of retail floor space will be opened in the CBD this year.

This eclipses the 23,000sqm of retail space that has come on stream over the past five years.

The report revealed CBD retailers were concerned over the deregulation of Sunday shopping hours across the state.

They feared the impact of facing more competition on Sundays, which has been the busiest day of the week.

The significant increase in retail space comes from the City Square development at Brookfield Place, which comprises 11,000sqm of retail space, and Raine Square, which is due to open on August 31.

Raine Square is fitted with 44,000sqm of offices, 13,000sqm of retail and hospitality space and a food court with seating for 570.

Twenty-eight retail and hospitality businesses are already confirmed to move into Raine Square, which aims to add 60 new specialty stores to the CBD.

The stores will be spread over three levels, with frontages on Murray, William and Wellington streets.

However, the new precinct has yet to prove its retail credentials.

Confirmed businesses opening in Raine Square include Coles, Croissant Express, a chemist and a dental clinic. The complex will also include a direct underground link to the William Street train station.

In March, a six-month study commissioned by the National Retail Association forecast that 118,000 retail jobs would be axed over the next three years as competition from online shopping increases.

Anecdotally, retailers in Western Australia have been doing it tough despite the boom-time conditions in mining.

However, ABS statistics released for May showed positive signs for the WA retail market.

Growth in retail spending was up 1.1 per cent in the state, significantly higher than the national average for the month.

This was more than triple the forecast of economists, who were tipping growth of 0.2 per cent for the period and continues a trend of consecutive, positive growth for each month this year.

Macquarie cited the past four interest rate cuts since November as a possible cause.

The Australian National Retailers Association speculated that shoppers might have increased spending to avoid the expected price rises associated with the introduction of the carbon tax last week.

“We executed 40 (retail) contracts in June, predominantly in the Perth CBD, and we consider a good year to be between 100 and 120 leasing contracts,” Mr Guttridge said.

Knight Frank said in a report there had been rumours that international fashion houses Zara and Topshop were looking to open flagship stores in Perth but were unable to find premises that met their strict criteria.

“International tenants are active in the CBD, however, Perth CBD retail hasn’t been configured to accommodate international retailers, so, as a result, owners are attempting to reconfigure to accommodate larger tenants,” Mr Phelan said.

“On a local level the food and beverage sector continue to be active in the leasing market, benefiting from the tight office and residential markets in the CBD at present, however, local fashion retailers are struggling.”

Knight Frank said the clothing and soft goods sector was the worst-performing
retail sector, with a 7 per cent drop in annual turnover.

Growth in cafe, restaurant and takeaway food businesses was the strongest, with a 16.7 per cent increase in annual turnover.

“The retail market has softened, rents are relatively stable, however, owners have had to offer increased incentives to attract and maintain tenants,” Knight Frank said.

The incentives include mezzanine and basement spaces for the Hay Street and Murray Street malls.  Rents for the shopfronts on the ground floors of the malls are higher than other CBD areas because of the high exposure to shoppers.

Knight Frank research manager Alison Smith said: “The vast majority of rental payments go towards the ground floor areas and some tenants have been making deals with retailers that allow them to use the basement space, or floors above, at little to no extra cost”.

An example of this is the Flight Centre shopfront on Hay Street, which is renovating the disused floors above the store for new offices. Another method tenants used to promote new leases was ‘pop-up’ stores.

Mr Phelan said the concept of pop-up stores was an increasing trend in the WA market, mainly due to increased uncertainty in the retail sector.

“It is used by retailers to test the market or introduce a new product or service to see if it is accepted by the general public and, if it is successful, retailers would normally commit to a longer-term lease,” he said.

“In shopping centres, this method is used to infill vacant space while a longer-term deal is being secured. Normally, the term of a pop-up store is six to 12 months at market rent with no incentive, however, this can vary.

“There has been evidence of fashion, jewellery and telecommunications-type tenants absorbing space under these terms in the CBD and retail strips.”

This form of leasing has been used at one40William and St Georges Terrace at Newspaper House, the historic frontage for Brookfield. CBD pop-up shops pay rent of between $1,100 and $1,500 a week.