Owners of older office buildings in central Perth are struggling to find tenants, with the latest Office Market Report showing a widening gap between premium buildings and the rest of the market. 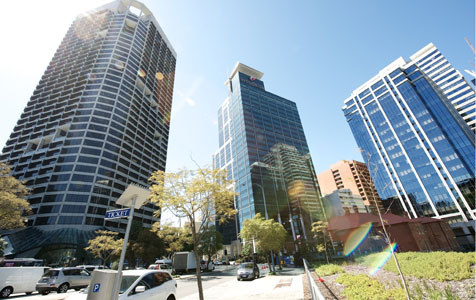 Owners of older office buildings in central Perth are struggling to find tenants, with the latest Office Market Report showing a widening gap between premium buildings and the rest of the market.

The Property Council of Australia said the office vacancy rate in the Perth CBD jumped to 9.0 per cent in January 2014, up from 6.9 per cent in July 2013.

The vacancy rate actually dropped to 1.4 per cent for premium buildings but increased for other grades, being as high as 12.3 per cent for C-grade buildings.

Property Council executive director Joe Lenzo said Perth was expected to follow the trend in other cities, where a number of older office buildings have been withdrawn from the market for major upgrades or for use as apartments.

The report found 33,938 square metres of negative demand for office space in the Perth CBD since July 2013.

“The slump in demand for office space in 2013 coincided a period of downsizing by a raft of businesses associated with the iron ore sector,” Mr Lenzo said.

The supply of new office space amounted to just 5,904sqm in the Perth CBD during the past six months.

“Looking ahead, we expect only a modest increase in new office supplies in the CBD in 2014 before a spike in new supplies beginning in 2015,” Mr Lenzo said.

The new stock due to hit the CBD market in 2014 includes developments at 32 St Georges Terrace and 863 Hay Street, which will add nearly 30,000sqm of space.

Beyond that, plans by Chevron and BGC to build major new office towers at Elizabeth Quay and the eastern end of the city respectively will add further to supply.

“Notwithstanding a significant portion of the vacancy in Perth being sub-lease space, most building owners still enjoy healthy levels of vacancy,” he said.

“Whilst the office market is expected to be soft for the next couple of years, with the new supply cycle not due until late 2015 and into 2016, incoming supply is not currently an issue.”

Commercial real estate group CBRE has estimated the amount of space available for sub-lease in the Perth CBD amounts to about 70,200sqm, or 4.5 per cent of total stock.

“As higher levels of supply start to filter through to the market in 2014, vacancy is likely to move moderately higher during the year,” CBRE’s head of research for Australia, Stephen McNabb, said.

“The next 12 months should see a recovery in tenant demand. This coupled with low levels of new stock entering the market will mean a far more balanced year,” Mr Denny said.

“Despite this, 2014 will be a year for tenants with attractive leasing deals available.”

The CBD trends were mirrored in the West Perth office market, with the office vacancy rate rising to 9.2 per cent in January 2014, up from 7.6 per cent in July.

The Property Council said a further 4,788sqm of new office supplies is expected to come on stream in West Perth in 2014, however no new space was in the pipeline for 2015 and beyond.

The ABS will move from Exchange Plaza to the Durack Centre at 263 Adelaide Terrace, after signing a lease for 3058sqm.

The deal means the Stockland-owned building is now fully leased.