FEATURE: Perth is in the middle of its biggest wave of office construction in decades, but a sustained burst of new supply means future prospects for commercial developers are increasingly bleak. 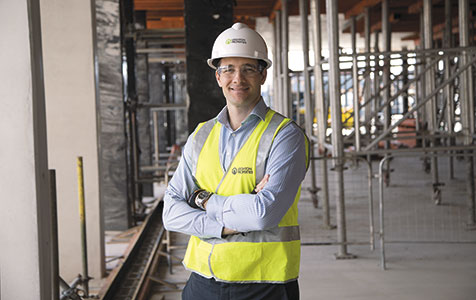 Perth is in the middle of its biggest wave of office construction in decades, but a sustained burst of new supply means future prospects for commercial developers are increasingly bleak.

Mr Collis went on to say the statistical data didn’t present a pretty picture for those in the office development space.

The headline figure Mr Collis was referring to is the CBD office vacancy rate, which is tipped to come in around 13 per cent once the Property Council of Australia releases its half-yearly update early next month.

Office vacancies in January this year were about 9 per cent, the Property Council said, up from 6.4 per cent at this time last year.

With a massive wave of new supply coming on over the next 12 to 24 months, commercial property agents and developers have raised fears that number could continue to rise, with some warning it could go as high at 17 per cent.

Figures compiled by Business News show there are about 162,000 square metres of office space being built in the Perth CBD, not including 11,000sqm delivered to the market last week when Probuild achieved practical completion at its $85 million refurbishment of Cloisters on Hay.

The vast majority of that space is scheduled to hit the market next year, with all four towers at Kings Square set to be complete by the middle of 2015, as well as the $280 million, 31-storey, 30,000sqm Mirvac Office Tower at the Cathedral and Treasury Precinct.

Other major projects set to come online in 2015 are Brookfield Office Properties’ 32,000sqm Brookfield Place Tower 2, Qube’s 11,500sqm 999 Hay Street, and the 15,000sqm refurbishment of the May Holman Centre by Golden Group.

“There are definitely some fairly chunky bits of new stock coming on the market,” Mr Collis said.

“The next couple of years are going to be difficult, but it does present some opportunities.

“If you have a tenant that’s dealing with you, you need to be well aware of the market circumstances and that means developers and commercial agents will definitely have to sharpen their pencils to get those guys in.”

The good news for developers is much of the stock coming out of the ground has largely been pre-committed.

At Leighton Properties’ Kings Square, 60 per cent of the office space has been leased, with Shell, HBF and John Holland all committing to take up a tower each.

The state government is underpinning Mirvac Group’s office tower at the Cathedral precinct, while Brookfield has lined up accounting firm Deloitte and law firm Corrs Chambers Westgarth to take the lion’s share of space at Brookfield Place tower 2.

But the situation is not as rosy for the massive list of office proposals in the Perth CBD.

Taking into account the balance of office space proposed for the Perth City Link and Elizabeth Quay, and a host of other high-profile developments, there are about 560,000sqm of office space in the planning pipeline.

To put that into perspective, there is around 1.6 million square metres of office space currently in the CBD, according to Y Research. The major problem with that pipeline, according to Y Research chief problem solver Damian Stone, is developers are all pitching to the same limited pool of tenants, and the major space-eaters – BHP Billiton, Chevron, Woodside and Rio Tinto – which need more than 50,000sqm apiece, are locked away for the next three to four years.

Even the second tier of potential anchor tenants is sorted, with Bankwest’s 30,000sqm requirements sewn up by Raine Square, while Fortescue Metals Group, WorleyParsons and Shell, which need around 20,000sqm, have their needs met already.

“If you look at professional services firms and law firms, a lot of them have signed leases in the last 12 months,” Mr Stone said.

“So if resources is quiet, and the state government isn’t likely to take more, then it needs to be professional services firms that will take the space, and a lot of those guys are committed.”

Mr Stone said the challenge for developers was centred on the scale of buildings that have been proposed.

“The average size of development in the city for the last five years is 16,000sqm,” Mr Stone told Business News.

“So if you want to fill that, you start looking at how many tenants there are over 2,000sqm in the whole city.

“You’ll need eight of them to fill it up, but there are only 81 in the whole city.”

Mr Stone also raised concerns about a recent Property Council survey, which showed 80 per cent of respondents couldn’t forecast their needs past 24 months.

“Tenants are very reluctant to sign up for seven to 10-year leases right now, no matter what the discounts are in rent, because of that uncertainty in marketplace,” Mr Stone said

However, Savills divisional director of office leasing Graham Postma said it took more than an anchor tenant to provide certainty in the current market conditions.

He said most of those buildings that had gone ahead with a pre-committed anchor tenant had not been able to secure second- or third-tier occupants.

“The decision-making process is taking longer and longer, and it’s fair to say that the longer it goes on, the more competitive the deals are that they are seeing.

“It encourages them to take a little bit longer and try and pick the bottom of the market.”

Mr Collis, however, said the balance of space in buildings being constructed on the basis of a sizeable pre-commitment was generally not leased until around three to six months out from completion.

“People either think several years ahead, or they start thinking about it when their option comes up,” he said.

“We won’t finish 999 Hay Street until around this time next year, and it becomes more relevant for people when completions start falling in the lease expiry cycles of the businesses that are looking.

“So if people are looking now, they aren’t necessarily looking 12 to 18 months into the future.”

Mr Sugiaputra said the commercial development market was about to experience a natural cycle of decreasing activity, following the completion of the 2015 construction boom.

“Everyone is pretty much pitching for the same tenants, which makes it pretty attractive for any potential tenants who are looking to move and relocate,” he said.

“It’s a really good time to go out there and secure some deals.”

“This market weakness will probably continue for another 12 months, so tenants should take advantage now before owners see the light at the end of the tunnel.”

Leighton Properties’ Kings Square project director, Bradley Norris, said developers were not only competing financially, but also on the basis of the quality of their offer.

Despite the high levels of competition, Mr Norris said he was confident that Leighton would be successful in leasing the 23,000sqm Kings Square Tower 1.

“We can be really competitive in the market from a quality of offer point of view, because we do see ourselves setting a benchmark on a whole range of things, from amenities to transport and quality of space.”

Mr Norris said tenants were being particularly clear in their expectations and requirements, and were starting to re-engage.

“What we have seen is a lot of the businesses we are talking to are actually just reassessing what their business needs are,” he said.

“They are coming to a more clear direction in terms of their own requirements, and we’re starting to see a pickup in demand, given that process is somewhat complete from the major tenants.”

Colliers International manager of research and urban economics, Michael Knight, said buildings likely to come under the most pressure would be secondary stock.

“All the new stock coming online is A-grade stock, so you would suggest the onus would be on owners of secondary stock to make it more appealing to the market,” he said.

JLL managing director John Williams said competition among developers had definitely put tenants in the box seat, with falling rents and rising incentives increasingly becoming a feature of the market.

In some cases, Mr Williams said, incentives for signing a lease were exceeding 25 per cent, which meant tenants moving premises were getting office fit-outs paid for by the developer.

“With rents coming down, moving becomes a bit more attractive,” he said.

“It’s a flight to value for money; that’s what tenants will be looking for.

“Looking at the prospects for 2015, we’re going to be in a very good market for our leasing department because there will be space and there will also be tenants looking for the opportunity to improve in their mind their accommodation, and do value for money deals.”