Affordable city office space is proving to be alluring for some suburban tenants. 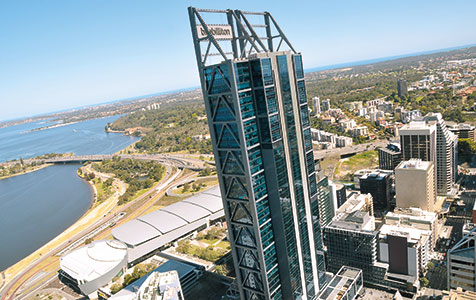 NEW HOME: Navitas will take up 1,692sqm on the eighth floor of Brookfield Place.

Commercial leasing agents are tipping a wave of companies to move from suburban centres to the CBD over the next two years, with decreasing rents and rising incentives making inner-city office accommodation more attractive.

Tertiary education group Navitas is the latest firm to take up a sizeable inner-city lease, after CBRE brokered a deal for it to move into Perth’s premium office precinct, Brookfield Place.

Navitas will take up the entire eighth floor of the 45-level tower.

Navitas had been at its Ogilvie Road home at the Kirin Centre for six years.

“Navitas has leased space in Applecross for six years and has been happy with the location, but as the company has grown we have taken up more and more floors in our current building,” Mr Houghton said.

“Brookfield Place offers us the opportunity to have all Perth-based corporate functions on the same floor, in Perth’s most modern office facility, and at a time when the CBD lease market is relatively attractive for lessees.”

Mr Houghton said the lease at Brookfield Place was about 30 per cent larger than its Kirin Centre accommodation, but no students would be recruited or educated in the CBD tower.

Instead, Brookfield Place will house administration functions such as IT, finance, public relations, business development, legal and executive support divisions.

Navitas will reportedly pay $1.25 million per year for the Brookfield Place lease, while its fit-out, which cost $456,000 according to City of Perth building permit documents, was paid for as part of the deal.

“The reason for that is we are seeing far better terms and conditions, and attractive incentive levels available in the CBD for tenants,” Mr Denny said.

“We are going to see an increasing number of tenants move from the suburbs to the CBD, for public transport, as well as the vibrancy of the CBD.

“The other thing is, a lot of tenants want to be close to their clients, particularly in the mining sector.

“It’s a fantastic time to do something, and Navitas certainly got one of the best opportunities.”

“The CBD has come a long way in terms of coffee shops, bars and restaurants,” he said.

“People want to work in a vibrant atmosphere.”

Y Research chief problem solver Damian Stone, who authors Perth’s pre-eminent suburban office report, said if companies were given the option at comparable rates, they would prefer to be located in the CBD.

However, Mr Stone said once a firm left a suburban centre, another would usually take up the vacated space in quick time.

“In Applecross there is a local engineering firm who are in three or four premises underpinning a 3,500sqm metre building on Kintail Road,” Mr Stone said.

“The challenge will be the rental levels that they are paying, and the key thing will be trying to look at the difference.

Mr Stone said the other defining aspect of the Navitas deal was a progressive diversifying of CBD office tenants away from the resources sector.

“Navitas is really an example of the strength of educational services as a new office tenant,’” he said.

“You combine that with the school at 50 William Street, and you see we’re getting some different, non-resources tenants now.

“One being education, another being healthcare, and there’s also been strong growth in professional services.”