Northern NSW is a beautiful part of the country, with a stunning coastline and gorgeous hinterland. 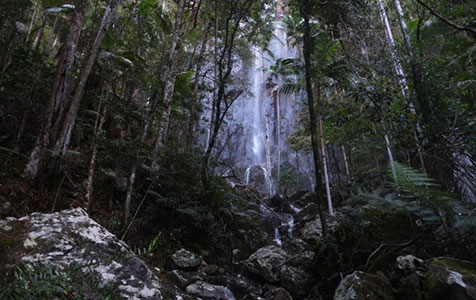 A walk through beautiful, rugged rainforest leads up to the base of Minyon Falls.

Byron Bay, with its famous surf beach and lighthouse, is a very popular town that has retained a low-key, relaxed atmosphere.

There are no high-rise developments, no McDonald’s or other big-brand fast food stores, and you need to drive a few kilometres inland to reach a big supermarket.

As a result, the old shopfronts have been retained in the town centre, which retains almost a village feel, albeit a busy village.

Byron Bay reflects the people who live there. It is home to lots of chilled-out, surfie retirees and attracts large numbers of visitors, especially tattooed and dreadlocked backpackers.

The main surf beach is stunning while a walk up to the lighthouse affords wonderful views of the surrounding coastline and countryside.

The famous hippie town of Nimbin is inland from Byron Bay, set among lush hilly countryside, and well worth a visit.

It certainly lived up to its reputation, even after an August fire destroyed the popular museum in the main street, along with the aptly named Rainbow Cafe and Bringabong shop. In their absence, the hemp store and hemp embassy hold pride of place on the main street.

Half the residents we saw wore dreadlocks and bare feet and the school kids were learning circus skills when we walked past. The biggest surprise was in the Nimbin supermarket, which readily supplied plastic bags for our shopping. Not what I expected in a greenie town.

The ‘Lock The Gate’ signs on most letterboxes or gates in around the town were a clear indication of the politics of the area. The coal seam gas companies are clearly fighting a losing battle.

Minyon Falls is a very impressive attraction nearby.

The falls are about 100 metres tall, and the viewing platform at the top provides a wonderful outlook.

Even better is the walk to the bottom though dense rainforest.

It’s possible to stand just a few metres from the base of the falls, where the water and the wind combine to produce a spectacular spray.

20,000 Cows is a vegetarian restaurant in Lismore that visitors to the region need to put on their to-do list. The food, atmosphere and service are all hard to beat.

After that, it’s onto Sydney.

Sydney lives up to its reputation

Sydney is an amazing city with lots of iconic attractions, so it’s hard to summarise a week there in short-form, but I’ll try.

I love visiting and experiencing what it has to offer, but have no great desire to live there, having spent four years living in Sydney in the late 80s and early 90s before returning to my home town of Perth.

While Sydney’s excitement and diversity is sometimes alluring, it also comes with congestion, noise and other baggage.

The Harbour Bridge and the Opera House are probably the two most photographed attractions, and for good reason, but I still think Sydney’s natural harbour setting is its greatest asset.

One day after arriving, on a glorious spring afternoon, we caught the ferry from Circular Quay to Manly.

I’ve taken this trip many times before, but will never tire of it.

It runs past many of Sydney’s finest attractions, natural and man-made.

Manly Beach, with its long expanse and reliable surf break, is another iconic attraction.

It also provides a handy reference point for Perth residents who fear multi-storey development along the oceanfront.

Manly has lovely old apartments and pubs, but also has modern hotels, shops and apartments up to eight storeys tall.

It doesn’t look or feel anything like the Gold Coast, which is what the anti-development lobby at Cottesloe seems to fear.

Instead, it feels like a vibrant community that has evolved with the times.

A lesser-known attraction near Manly is Shelley Beach, a small, sheltered cove that is popular for snorkelling and scuba diving.

Driving out to North Head, just past Manly, is another way to take in the majesty of Sydney Harbour.

The high cliff top viewing platforms provide wonderful views across to the city, south to Bondi and east to the ocean.

We saw seals playing in the ocean below us, near to where the surf was crashing on the rocks.

It’s also known as a good spot for seeing whales.

Before leaving Sydney, we also took a trip to spectacular South Head, nearby Bondi Beach and the beautiful Watson’s Bay.

There are so many wonderful spots, we didn’t find time for the Bondi to Bronte cliff top walk, which many rate as Sydney’s number one attraction.

The Harbour Bridge climb has become one of Sydney’s most popular drawcards.

For those of us who don’t enjoy heights, simply walking over the harbour bridge is more than enough.

It affords spectacular views from what I consider a very high vantage point.

The walk led us to Miller’s Point, an area that features an abundance of 19th century and early 20th century heritage buildings.

It’s similar to The Rocks, but without the commercial, touristy developments.

There are plenty of different museums in Sydney, and we made it to just two.

We had a great day at the National Maritime Museum at Darling Harbour, which includes a naval destroyer, submarine and patrol boat, and a lovingly restored sailing ship dating from the 1870s.

We also visited the science-focused Powerhouse Museum, which has everything from steam engines to space satellites and ballroom dancing costumes, but didn’t hold our attention to the same extent.

Sydney’s inner suburbs have a high-energy buzz, in daytime and at night.

There are lots of restaurants, cafes and shops, and an eclectic collection of people.

It’s good fun just soaking up the sights and the atmosphere in places like Surrey Hills and Darlinghurst.

One gem we discovered was Mamak, a very popular Malaysian roti restaurant that always has queues out the front.

Somebody in Perth should bring this concept to the west.

We went there on a cold, wet evening so we had to wait only about 10 minutes.

Last but not least, we went out to Sydney Olympic Park to see the Dockers play the Sydney Swans.

It was a great game, and hats off to Sydney for an impressive win.

The game was enjoyable despite, rather than because of, the venue.

ANZ Stadium has an 80,000-seat capacity but is rarely more than half full – there were only about 35,000 fans at the Dockers game.

The Swans fans hate it, much preferring the SCG, which has a smaller capacity (about 50,000) but much better atmosphere and therefore typically attracts larger crowds.

The designers of Perth’s new stadium should heed this experience, along with the outstanding success of the redeveloped Adelaide Oval, where the fans are all close to the action.

One initiative that has bought some atmosphere to the vast and barren Olympic Park is the setting up of temporary food stalls outside the train station before big games.

This would go down a treat at Burswood, which will need more than just a big stadium to make it a success.