By click or by app, there’s no going back

Global retailers provided a rare bright spot in an otherwise subdued sector over Christmas, and the dominance of the online model is set to grow. 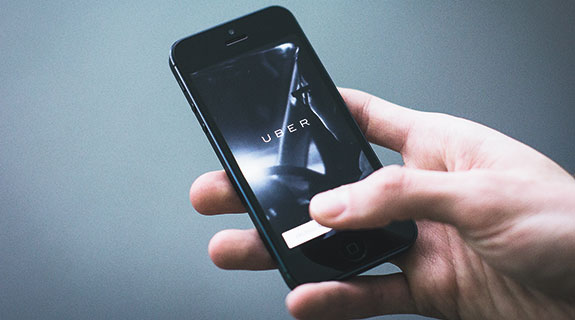 DISRUPTER: The rise of Uber is part of a global pattern that has emerged over the past two decades.

Global retailers provided a rare bright spot in an otherwise subdued sector over Christmas, and the dominance of the online model is set to grow.

Global online retailer Amazon enjoyed record Christmas trading, which is not something that can be said about most Australian retailers, especially those lacking the two key words when it comes to describing Amazon – online and global.

Other companies with a global reach and a strong online offering, including Facebook, Netflix and Google, also experienced similar bumper trading.

Most people are familiar with those organisations and what they sell, but not everyone can see the common links or the way in which they are capturing an increased share of every market, in every country, in every corner of the world.

Globalisation, a concept usually connected to big manufacturers such as carmakers and household consumer goods, has become a factor in almost everything we do; for better and for worse.

Two events triggered this realisation over the past few weeks. The first was a report on Amazon’s Christmas sales of books, toys and a zillion other products, which increased by 200 million items on the same holiday period in 2014, good enough to lift Amazon’s share price to a record high of almost $US700, a rise of 120 per cent in 12 months.

The second event was a trip home from a Christmas party with Uber, the ride-sharing service that has made life awfully difficult for conventional taxi drivers.

The ride with Uber (more than Amazon’s sky-high share price and record sales) personalised what’s happening; because while the man driving the Uber car lived locally, and provided an excellent service, a slice of the fare went to the US.

Perth’s major taxi dispatch service has been foreign owned for the past six years so there’s nothing new in the profit going offshore, but what is new is the speed at which Uber has moved into the Perth market and the way it has radically changed a century-old service through slick use of mobile communications and an easy payment system.

Uber is part of a pattern that has been developing over the past 20 years; internet sales of music were the first to change the way a business works, with shops selling recorded music in its many forms forced out of business because consumers found the online offering convenient and cheap.

Bookstores were next to go as online retailers such as Amazon found a way to get deliveries to customers at a reasonable price, and then found an even easier way by delivering books via the internet to electronic reading devices such as the Kindle.

On it goes, and it would be wise to assume that it’s not going to stop as the e-commerce revolution rolls out an increasingly clever and cost-effective range of products that can be sold globally with all the economies available when operating in a big market.

But even before we get hit with the next generation of online offerings, it is interesting to consider what we can already do without leaving our home or office – and to then think about how a global business can often do the job quicker and cheaper.

Investors, especially in the US, have been quick to spot the power of the online revolution, snapping up shares in a four-member group dubbed FANG – an acronym for Facebook, Amazon, Netflix and Google.

Three of those companies have been active in Australia for some time. Netflix is the relative newcomer, but you only have to see the near-panic reaction of cable (and free-to-air) television services to the Netflix threat to appreciate the damage it is already causing to local businesses.

From its US base, Netflix is doing to television what early online services did to music shops two decades ago – competing with a slick service and taking a big share of the profit in an already skinny market.

How can Netflix be so successful?

The answer is in those same two words that apply to Amazon – online and global, and an ability to sell in bulk.

The spread of the internet and improvements to its quality and reliability means that Netflix has gone from a standing start to 75 million subscribers in 190 countries, adding 5.6 million customers in the last three months of last year alone.

Perhaps even more surprising is that only 1.6 million of the new customers were inside the US.

After years of speculation it is clear that global, online services have arrived – and it would be wise to assume that there are a lot more to come.