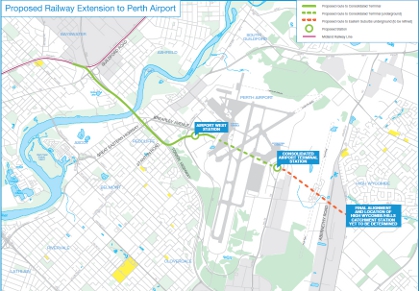 The state government has unveiled its preferred route to link Perth Airport to the metropolitan area passenger rail network, but hasn’t revealed how much it will cost or when it will be built.

Transport Minister Troy Buswell today announced details of a plan to build a rail spur from the Midland line, near Bayswater station, along Tonkin Highway to two stations to be built at Perth Airport.

“Cabinet has approved the reservation of the surface route on land under control of the State and has endorsed ongoing discussions between the Public Transport Authority (PTA) and stakeholders to ensure the route is protected,” Mr said.

Mr Buswell said the rail line would not only provide public transport to Perth Airport but also improve access to the eastern foothills.

“Perth Airport will continue to experience substantial passenger growth and it is critical transport infrastructure is planned to ensure adequate services are in place to cater for the projected demand,” he said.

Mr Buswell said the government’s next step would be to determine the project’s full cost and its investment priority.